Review: One for the Money - Janet Evanovich 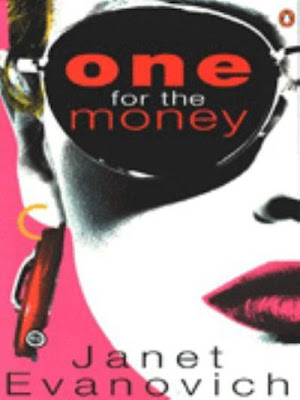 Stephanie Plum is down on her luck. She's lost her job at New Jersey's most down-market lingerie store, her car's on the brink of repossession, and her apartment is fast becoming furniture-free. Enter Cousin Vinnie, a low-life who runs a bail-bond company. If Stephanie can bring in vice cop turned outlaw Joe Morelli, she stands to pick up $10,000.

But tracking down a cop wanted for murder isn't easy. And suddenly Stephanie has another problem on her hands. Benito Ramirez, a prize-fighter with more menace than mentality, wants to be her friend - and he won't take no for an answer. Soon Stephanie begins to know exactly what it feels like to be pursued - and the best person to protect her just happens to be on the run . . .

Review:
Stephanie has lost her job, she's completely broke and is about to lose both her car and her apartment so she needs money and she needs it quickly. Desperate she turns to her cousin Vinnie for a job at his bail bond company and finds herself thrown in at the deep end when she is asked to bring in Joe Morelli. Stephanie and Morelli may have history but it isn't going to be easy to capture a cop who is up on a murder charge. Then when Stephanie finds herself getting unwanted attention from boxer Benito it looks like Morelli may be the only person who can keep her safe.

I first discovered the Stephanie Plum series years ago and I must be on at least my third re-read of the series by now (well for the earlier books anyway). I'm a massive fan of Janet Evanovich and with the film version of One for the Money coming out in the UK in February I thought it was about time I picked up the series again. This is one of my favourite series, especially when I'm looking for something light hearted and pure fun that never fails to have me in tears of laughter.

Stephanie is like the Bridget Jones of the bounty hunting world and she skips from one disaster to the next in hilarious fashion. Along with her sidekicks Lula (an ex hooker with a love of all things Lycra, a heart of gold and a big attitude) and Grandma Mazur (a completely kooky old lady who loves guns and dreams of becoming a hot shot bounty hunter like her granddaughter) she manages to get herself into all sorts of trouble. Luckily she has two hot men to call on for back up - the sexy cop Morelli and the deliciously mysterious bounty hunter extraordinaire Ranger. 10 years and more than 15 books since I started reading this series and I still can't make up my mind which of these guys I love the most!

One for the Money is a fabulous introduction to Stephanie's world - you meet one of my favourite casts of characters, the plot is fast paced, the mystery keeps you guessing right to the end and the story will have you snorting with laughter. I can't recommend this series highly enough!