Review: To the Nines - Janet Evanovich 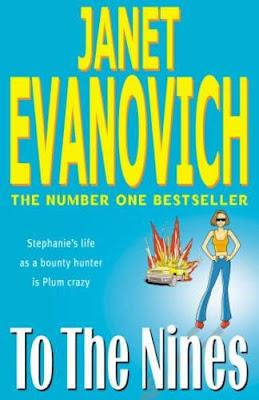 Stephanie Plum's got rent to pay, people shooting at her, and psychos wanting her dead every day of the week (much to the dismay of her mother, her family, the men in her life, the guy who slices meat at the deli... the list goes on). An ordinary person would cave under the pressure.

But hey, she's from Jersey.

Stephanie Plum may not be the best bounty hunter in beautiful downtown Trenton, but she's pretty damn good at turning situations her way... and she always gets her man.

Her cousin Vinnie (who's also her boss) has posted bail on Samuel Singh, who mysteriously disappears just as his work visa is running out. And Stephanie is on the case to ensure the elusive Mr Singh doesn't make his disappearance more permanent. But what she uncovers is far more sinister than anyone imagines and leads to a group of killers who give a whole new meaning to the word ' hunter'. In a race against time that takes her from the Jersey Turnpike to the Vegas strip, Stephanie Plum is on the chase of her life.

Review:
Stephanie's latest case involves a trip to Las Vegas searching for a guy who jumped bail and abducted a dog in the process. Her antics are usually bonkers enough on her home ground so you can just imagine the sort of madness that goes on when she's in Vegas with Lula and Connie! As always this series is full of crazy but hilarious situations (in this case made even funnier by Lula's latest fad diet), Stephanie running around like a headless chicken trying to work out what the heck is going on around her and the ongoing mess of her romantic life where she can't seem to make a final decision between Morelli and Ranger.

Ranger is used to Stephanie destroying his cars but this time around it's his men she keeps wiping out with a series of ever more bemusing accidents. I think Morelli just hasn't got a clue how to handle the crazy that Stephanie brings, his life would be much quieter without her but he can't seem to resist her anyway. I love Stephanie's family, Grandma Mazur in particular and Lula is a hilarious sidekick.

I have to admit the mystery was a little lacking here - it was far too easy to spot the bad guy! - and I should be getting irritated by the fact that Stephanie never seems to learn any bounty hunter skills at all but I just enjoy these books too much to complain about those details. When I'm in the mood for something light hearted, something that requires absolutely no brain power but is guaranteed to make me laugh out loud then this is my go to series and I can't see that changing anytime soon.