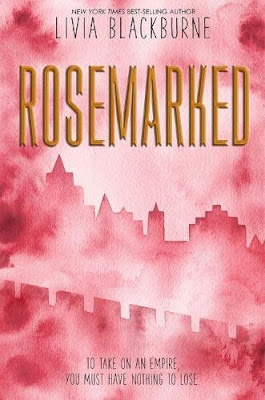 When Zivah falls prey to the deadly rose plague, she knows it’s only a matter of time before she fully succumbs. Now she’s destined to live her last days in isolation, cut off from her people and unable to practice her art—until a threat to her village creates a need that only she can fill.

Broken by torture at the hands of the Amparan Empire, Dineas thirsts for revenge against his captors. Now escaped and reunited with his tribe, he’ll do anything to free them from Amparan rule—even if it means undertaking a plan that risks not only his life but his very self.

Thrust together on a high-stakes mission to spy on the capital, the two couldn’t be more different: Zivah, deeply committed to her vow of healing, and Dineas, yearning for vengeance. But as they grow closer, they must find common ground to protect those they love. And amidst the constant fear of discovery, the two grapple with a mutual attraction that could break both of their carefully guarded hearts.

This smart, sweeping fantasy with a political edge and a slow-burning romance will capture fans of The Lumatere Chronicles and An Ember in the Ashes.

Review:
Zivah has dedicated her life to becoming a healer so she can serve her people but when an outbreak of the rose plague affects Amparan soldiers currently visiting her village she ends up getting infected herself while treating her patients. There are only three possible outcomes to the rose plague and the vast majority of people don't survive the first infection. Rare survivors end up Rosemarked which means they're still highly infectious and can continue to spread the disease even though they no longer have symptoms, the disease always flares back up at some point and will invariably lead to death but there is no way to tell how long it will be before that happens. Even rarer survivors can become Umbertouched, they are now completely immune to the plague and are no longer contagious so are allowed to return to their lives rather than remain in quarantine. Unfortunately for Zivah she becomes Rosemarked and now instead of serving her village as a healer she is forced to live alone on the outskirts unable to touch or be touched for fear of spreading the plague.

As Zivah quietly experiments on herself hoping to find a cure to the plague her life is turned upside down when her village leader asks her to help with a secret mission. The village has been coming under increasing threat from the Amparan Empire and along with the Shidadi Tribe they have a plan to infiltrate the Amparan army with an Umbertouched soldier but they need Zivah's help to pull it off. Dineas was tortured by the Amparan's and is seeking revenge but at the same time he wants to protect his people and the best way to do that is to find out more about the threats they face.

I absolutely loved this story, it's a bit of a slow build so don't expect lots of high stakes action from the very first page, but I was completely captivated from very early on and enjoyed the clever world building and realistic characters. I loved seeing the way the plague effected both Zivah and Dineas, initially they have pretty low opinions of each other but they gradually become friends as they work together against a common enemy. Life isn't easy for either of them and the deeper they get into their undercover work the harder it is to know who the real enemy is. You do have to suspend belief a little about the way Zivah was able to remove Dineas' memories using her healing skills but could bring them back for short periods of time when she needed to talk to him but it added such an interesting dimension to Dineas' interactions with the people he met that it didn't bother me at all.

The slightly slower pacing in the beginning really pays off in the second half of the story when things start to get much more complicated and we start to uncover some interesting secrets. The ending was edge of your seat stuff and I can't wait to get my hands on a copy of Umbertouched. It's funny because I've not seen much buzz around this book in the blogosphere but it's one of the most unique series I've come across in a while and it's definitely one I'd recommend to YA fantasy fans.

Source: Received from Turnaround in exchange for an honest review.