Harry Potter and the Chamber of Secrets House Editions - to buy or not to buy? 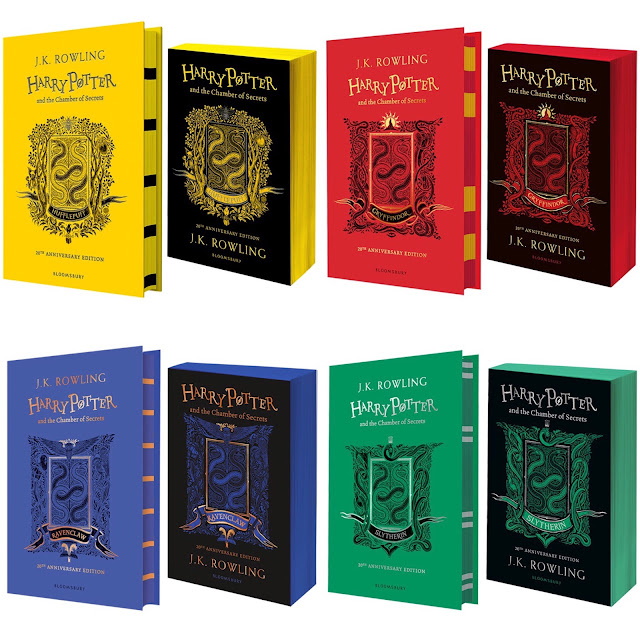 I'm sure EVERYONE must have seen the new Chamber of Secrets House covers that Bloomsbury are publishing this June. What I really want to know is what everyone thinks of the idea though?

I was one of the fans who was thrilled when they announced the Philosopher's Stone House covers, I was determined to only buy the Hufflepuff versions but they were so beautiful that I ended up buying the entire set of eight. No I can't tell you why I needed them all but they take such beautiful pics for bookstagram LOL. You can see some of the pics I took in this post I wrote last year and I have zero regrets for buying them, but.....

....it does mean that I now have a RIDICULOUS amount of copies of Philosopher's Stone, there's my original paperback, the hardback with the cover art designed by Jonny Duddle (I bought a box set of the whole series because I loved those covers so much), then my Spineless Classics poster which was made with the full text of the book, the gorgeous illustrated edition and now eight house covers. That's not including the kindle version and audiobook! So, let's just add that up quickly, I now have fourteen - YES, FOURTEEN!!! - copies of Philosopher's Stone! Yup, I definitely have a problem LOL. 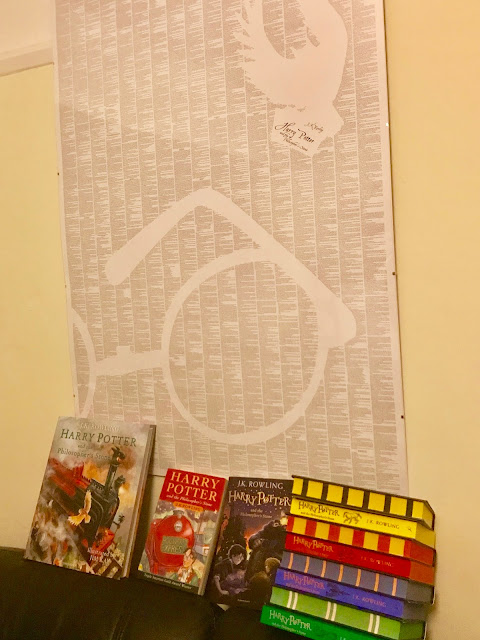 Twelve of my copies of Philosopher's Stone

And that leads me to my dilemma when it comes to the House editions of Chamber of Secrets (and Bloomsbury have confirmed there will be House editions for the entire seven book series). I would love to have the entire series in Hufflepuff colours, but at the same time I know me and I know what will happen if I start buying more of these books. I'm going to end up with all the houses just like I did with Philosopher's Stone. I can justify having a paperback, hardback, kindle and audiobook for all seven books. I can justify buying the illustrated editions as they're released because Jim Kay's illustrations add so much depth to the stories. Luckily I don't have to justify buying more Spineless Classics posters because they only made the first book (and hallelujah for that because all my wall space is taken up with bookcases and I have no room for more posters LOL).

What I can't justify is buying 8 more copies of every book, I can't do it financially, I don't have enough shelf space and to be honest I feel like they're starting to take advantage of fans at this point. Let's look at the figures again, if I buy them all I'd end up with 14 copies of Philosopher's Stone (tick), and 13 copies of the other six books in the series. That's NINETY-TWO copies of seven stories! And we're not even talking about the numerous copies of the Hogwarts Library, the scripts for the Cursed Child play and Fantastic Beasts and Where to Find Them movie and dozens of books about the making of the movies, the characters, the beasts, the costumes, the book and model sets and all the other HP world books I've already bought over the years.

Putting the Harry Potter logo on ANYTHING has pretty much become a license to print money these days. I know I'm not the only crazy Potterhead who spends far too much money on HP merch in all it's shapes and forms - over half the Christmas presents I received this year were HP related and I've run out of space in my dedicated HP cabinet to even put all the stuff I own! - but there comes a point where you have to try and start drawing a line and I'm trying to convince myself to draw the line at these new House editions. 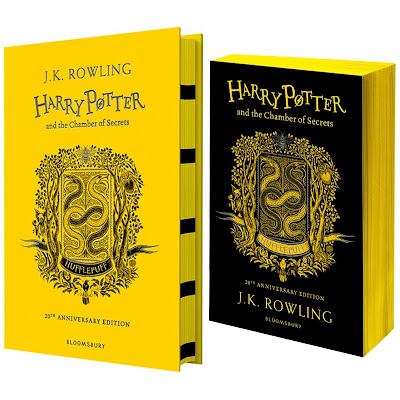 I'm pretty much doomed to failure because I'm already trying to talk myself into just buying the Hufflepuff versions so I'll have them as a set. What remains to be seen is if I can stick with just the Hufflepuff ones because if I buy the whole set of Chamber of Secrets then I will HAVE to buy the rest of the series as they release over the next five years. The collector in me won't allow for anything else! And this is why it sucks to be a book hoarder LOL. 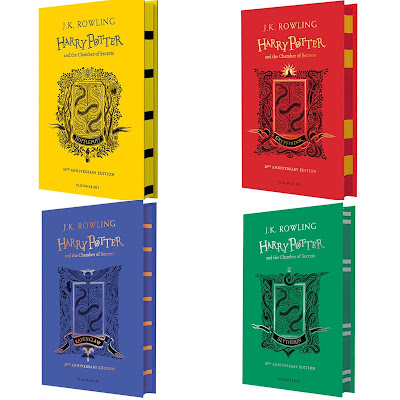 The full set of Hardbacks (with the gorgeous patterned sprayed edges!) 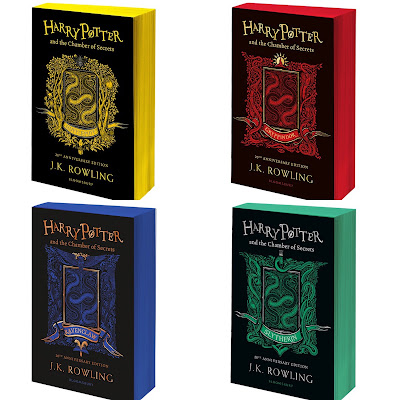 The full set of Paperbacks

In case you missed it here's the official Bloomsbury trailer:


So what do you think of the House Editions? Do you love them or hate them? Are you planning on buying any or even all of them? And can someone please find a way to make me stick to buying only the Hufflepuff versions? I'll be forever grateful if you can!
at 18:00