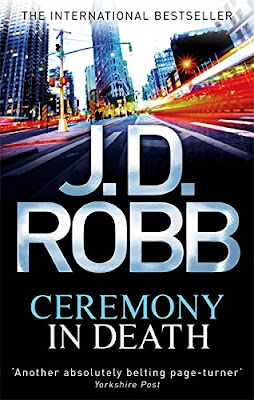 Meet me tomorrow, midnight.
Aquarian Club.
TELL NO ONE.

But then another victim is claimed: Frank's own granddaughter. As Eve delves deeper into the case, more mutilated corpses are discovered. Then a dead body is placed outside Eve's home.

Drawn into the sinister world of a sexual satanic cult, Eve must put her life on the line to uncover a sadistic killer, before she becomes his latest victim.

Review:
Eve takes any murder personally but when the deceased is a fellow New York cop that just makes her all the more ready to bring the killer to justice. When a second body is left outside Eve's home she finds herself drawn into investigating a satanic cult. As the case gets darker and Eve is forced to work without some of her usual backup personal relationships start to suffer and the killer is more than ready to take advantage of her distraction.

Ceremony in Death was another great instalment to the In Death series, in some ways I think it was darker than some of the other books and it was the first time that there seemed to be a bit of a paranormal twist to the story but I enjoyed the slight change in direction and it was fun to see Eve so out of her comfort zone. Eve is a realist who absolutely refuses to believe in the supernatural so she's determined to find a scientific answer to the mysterious events surrounding the case but Roarke is much more open to the idea of magic and wants to make sure she's protected no matter what she's facing. I love how their differences make them a stronger couple and it's great to see their relationship growing stronger in every book. Roarke is definitely becoming a favourite book boyfriend but I think Eve is brilliant too.

Some of Eve's other relationships are tested in this book though, there are certain things she's asked to keep secret from Feeney and that is really hard for her because he's one of the few people she can normally turn to for advice. When he finds out she's been hiding things he's understandably upset and it puts a wedge between them but luckily for them both Roarke is there to talk some sense into both of them. Eve also has a moment where she's a little hard on Peabody but I liked the way they managed to talk things through and were both able to admit the mistakes they made. It's great that the side characters in this series are so well developed, the stories aren't just about Eve and Roarke and we're getting to know lots of the others too which just adds to the world J.D. Robb has created.

This is such a huge series that it's going to take me a long time to catch up but I'm looking forward to spending more time with everyone and have a feeling that the best is yet to come.