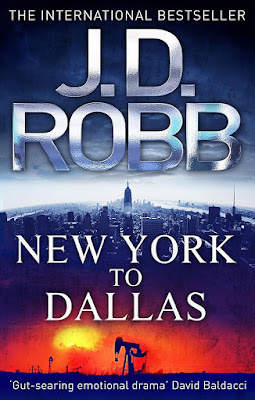 New York homicide cop Eve Dallas is plunged into a terrifying nightmare, where her past and the present are about to collide.

Eve Dallas was just a rookie cop when her instincts led her to the apartment of Isaac McQueen, a murderer and paedophile, who was keeping young girls in cages.

Now a homicide Lieutenant, Eve is one of the most distinguished officers in the city - and then she learns that McQueen has escaped from jail.

Bent on revenge against Eve and with a need to punish more 'bad girls' McQueen heads to Dallas, Texas - the place where Eve was found as a child, the place where she killed her own abusive monster when she was only eight-years-old.

With Eve and her husband Roarke in pursuit of McQueen, everything is on the line and secrets from the past are about to be explosively revealed.

Review:
As a murder cop Eve deals with death on a daily basis, she sees the worst of the worst and she does it without flinching because she's made it her mission to stop the bad guys and protect others. Thanks to her past it always hits a little closer to home when children are involved though and this case is one of her worst yet. She was a rookie she first came up against murderer and pedophile Isaac McQueen, she rescued the children he had kept locked in cages but was too late for the ones he had already killed and even the survivors had to live with what had been done to them. McQueen should have been imprisoned for life but when he manages to escape he goes straight back to his old ways, but this time he also has a vendetta against the woman who took his freedom from him. He wants to make Eve suffer and he's had enough time to dig into her past and know just how to hurt her the most. Luring her to Dallas by kidnapping one of his previous victims McQueen is going to remind Eve exactly where she came from and if he has his way he'll make her live through her worst nightmares all over again.

New York to Dallas was definitely the most intense book of the series so far, McQueen's crimes were horrific to read about even though J.D. Robb doesn't go too far into the gory details. It was also really difficult to see Eve dragged back to a place that has so many painful memories for her. She has come so far over recent books and seemed to be finally putting the past behind her but it's all brought right back to the front and centre here. She no longer has to deal with this alone though, she has Roarke, Mira, Peabody and the rest of her team right beside her and no matter how much time McQueen has spent planning this he's forgotten how smart Eve is and how good her instincts are.

While this was a hard read at times it was also really uplifting to see Eve and Roarke working through things together, she's supported him facing his past and his family in Ireland and now he's doing the same for her. There were also a few really great scenes with Mira and I think Eve is finally starting to understand how much the other woman cares for her. We also get some answers to questions about Eve's past that came up in quite a shocking way. There was probably a little less humour in this one than in most of the books because Peabody has been left behind in New York but she's not completely absent from the story and I think this was a part of Eve's story that needed to be a little more serious.

It's going to be interesting to see if this trip to Dallas was cathartic for Eve or whether revisiting her past is going to cause a set back to her mental health as the series continues. Whatever happens she's got people on her side that will help her get through it which is the most important thing. I'm so totally hooked on these books and I can't wait to carry on reading.