I have been a HUGE fan of Philip Pullman's His Dark Materials trilogy ever since the books first released in the 1990s (shhhh I'm not really that old LOL) so of course I've been ridiculously excited ever since I first heard that the BBC were making an adaptation of the series. The first episode airs tonight (ONLY 2 HOURS TO WAIT!!!!!!!!) so I thought now would be the perfect time to share the teaser trailers and cast interviews I've been watching on YouTube.

This really does have an all star cast and the trailer looks absolutely incredible so I have crazy high hopes for the series. I'm really hoping that we'll get to see the whole trilogy brought to life!

Everything you need to know about His Dark Materials (including interviews with cast members):

On the very, very slim chance that you don't know anything about this series I'm including the blurb for the first book, Northern Lights, (which was published in the US as The Golden Compass) and you'll find links to my reviews of the trilogy below. 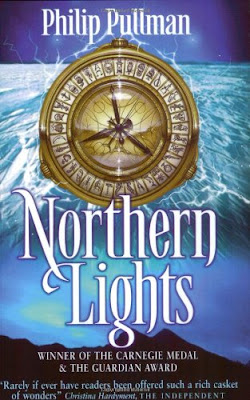 When Lyra's friend Roger disappears, she and her daemon, Pantalaimon, determine to find him. The ensuing quest leads them to the bleak splendour of the North, where armoured bears rule the ice and witch-queens fly through the frozen skies - and where a team of scientists is conducting experiments too horrible to be spoken about.

Lyra overcomes these strange terrors, only to find something yet more perilous waiting for her - something with consequences which may even reach beyond the Northern Lights . . .

His Dark Materials:
Northern Lights (Released as The Golden Compass in the US)
The Subtle Knife
The Amber Spyglass

So who else is as excited for tonight's show as I am? I really hope they do the story proud but these teaser trailers have left me feeling pretty confident that I'm going to love every minute of it!
at 18:00