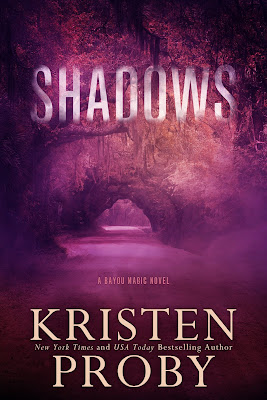 From New York Times Bestselling Author, Kristen Proby, comes an all new paranormal romance set in the mystical city of New Orleans…
​
I am never alone. Not even when I am alone.

I see the unquiet dead, the souls that wander through the French Quarter.

They can’t move on, and I can’t stop seeing them.

I wear malachite for protection, and I control what I let in. It’s the only way to stay sane. Everything changes the day Cassian Winslow joins my ghost walking tour and knocks my world off its axis with green eyes the color of the stone around my neck.

An unspeakable evil is loose in New Orleans, taking young women and leaving a bloodbath in his wake. More shadows lurking for me. More unhappy dead. There might be a way to stop it.

Open myself up to Cassian.

If I do, it could spell his death.

Review:
Brielle and her sisters Millie and Daphne have always had strange abilities but it was only when they were older and able to escape the abusive home that they grew up in that they were able to find another witch to teach them how to use them. Living in New Orleans Brielle's connection to the dead has caused her no end of trouble and she sees the shadows of ghosts wherever she goes. It's only recently that these shadows have started to appear as real people that are able to communicate though and, with a serial killer targeting young women who look just like her, now they're reaching out to Brielle for help.

FBI profiler Cash is only in the city on forced vacation after working a difficult case but he's enjoying spending time with his brother and he finds himself drawn to Brielle from the minute they meet. He's not sure what to make of it when she mentions her abilities but when a young woman they've both met goes missing he agrees to help her liaise with the local police to try and help with their investigation. The two quickly find themselves drawn into a dark and disturbing case and it looks like Brielle may be a target for the killer.

Shadows is my first Kristen Proby book but it won't be the last and I'm already looking forward to getting to know Brielle's sisters better as this series continues. I found all three of them really interesting characters and I loved the different abilities they all have. They had a really tough upbringing but it just brought them closer together and there's a really strong bond between them. Since leaving their home they've built a supportive community around them and found other like minded people to learn from.

Cash was a nice guy and I liked how supportive he was of both Brielle and her sisters but if I have one complaint about this book it was that the connection between them was a little too fast. I found it hard to believe he would be so quick to believe Brielle about her abilities and thought he would have been much more suspicious of her claims, at least in the beginning. I think a slower build on their connection would have made their relationship that bit more believable but I liked the two of them together so that only bothered me in the very beginning.

One thing I will say is that Shadows was far more creepy than I expected it to be. We see parts of the story through the eyes of both the serial killer and his victims so considering how much he loved to torture people that did get quite dark and hard to read in places. I'm not knocking it because it was very interesting to read but I just think you should know going in that this isn't a light and fluffy paranormal romance so you're prepared. The mystery was good and I like the way things were left off ready for the next book in the series, it wasn't a cliffhanger though, more of a winning the battle but still having the rest of the war to fight kind of situation. The rest of this series is definitely on my wish list but I think I'm going to have to check out some of Kristen Proby's other books while I wait for the next one to be released.