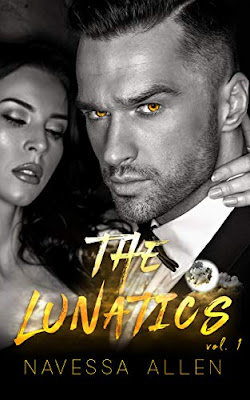 Layla Fitzpatrick lives a simple life, for a werewolf. And that's just how she likes it. Her childhood was less than ideal. She'd like to spend her adult years flying under the radar of more powerful preternatural creatures. Because she knows from experience what happens when they notice you.

Everything changes one early summer night when she attends a ritual bonding ceremony meant to join two werewolves together for life. Midway through, the spell becomes corrupted and she finds herself unexpectedly mated to the stuffiest shifter she's ever laid eyes on.

Michael Kolbeck is more man than wolf. He spends his days in a skyscraper, building his family's empire. At night, he prowls the streets of Boston, a city where shifters, witches, and vampires walk a delicate tightrope of ceasefire masquerading as peace.

Little do they know that Layla's arrival will act as the spark that ignites the fire, and that thin veneer of peace is about to vanish.

Review:
I'm a huge paranormal romance and urban fantasy fan so I knew going in that this was going to be just my kind of story but it's like Navessa Allen has been rooting around inside my head and plucked out every single item on my wish list for this kind of book then meshed it all together into The Lunatics. We have a strong, independent, intelligent heroine who knows what she wants from life and isn't afraid to go looking for it. Then there's a hero who is alpha without being over the top about it, he's sexy but in a more subtle way than a lot of heroes you read about and he doesn't mind when a woman is physically stronger than him. Throw in fantastic world building, a society where race, sexuality and gender seem to matter very little and a great cast of side characters and I'm hooked.

Layla and Michael are thrown together by circumstance, having a mate is not something either of them was ready for but they both accept the situation when they're accidentally bonded in a ceremony gone wrong. Neither of them is willing to rush into a relationship no matter how attracted they are to each other or how much their new bond is messing with their emotions but they're not pushing each other away or fighting it either. Instead they take time to get to know each other, they gradually build trust between them and they discuss the possibilities for their future like adults so that they're both fully on board with every choice they make. I love the slow build of their relationship, the chemistry is simmering along nicely in the background pretty much from first sight but it takes a long time before they're willing to take that step into a physical relationship.

Layla is really laid back and much more relaxed than Michael, she fully accepts her werewolf side and is happy to spend time both as a wolf and as a human. She enjoys spending time with her family and her pack and is happy to live a fairly simple life. Michael on the other hand has grown up learning how to suppress his wolf instincts, his family live in the city and they spend nearly all their time as humans. It's a careful balancing act in Boston with territory split between the werewolves, vampires and witches while the human population is completely oblivious to their very existence. For Layla living in the city is a real test, the sights, sounds and scents are completely overwhelming to her senses and she's walking on a tightrope over a field full of political landmines having no idea what wrong move could set off an explosion. Michael tries hard to help her fit in but it's fair to say his family are a nightmare and I think things are only going to get worse before they get better.

While the story doesn't end on a cliffhanger it did leave me desperate to get my hands on Volume Two so I'll be eagerly awaiting the next instalment. I have a feeling this is going to become one of my favourite series!

In interests of full disclosure I have to point out that Navessa is a very close friend of mine, however that hasn't affected this review or my rating. I purchased this book myself and these are my honest opinions of the story.