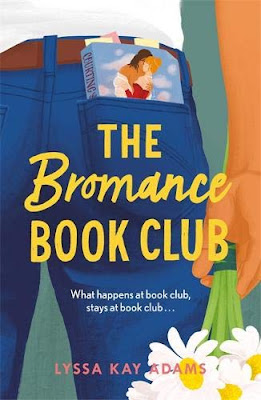 The first rule of book club:
You don't talk about book club.

Nashville Legends second baseman Gavin Scott's marriage is in major league trouble. He’s recently discovered a humiliating secret: his wife Thea has always faked the Big O. When he loses his cool at the revelation, it’s the final straw on their already strained relationship. Thea asks for a divorce, and Gavin realizes he’s let his pride and fear get the better of him.

Welcome to the Bromance Book Club.

Distraught and desperate, Gavin finds help from an unlikely source: a secret romance book club made up of Nashville's top alpha men. With the help of their current read, a steamy Regency titled Courting the Countess, the guys coach Gavin on saving his marriage. But it'll take a lot more than flowery words and grand gestures for this hapless Romeo to find his inner hero and win back the trust of his wife.

Review:
Baseball player Gavin Scott's marriage is in trouble, he thought his relationship was pretty much perfect but after discovering his wife has been faking her orgasms for the entire time he's known her he felt humiliated and his first reaction was to walk away. Now that Thea is asking for a divorce he's realised what he's about to lose and now he's determined to do whatever it takes to get her to give him a second chance. The only trouble is he has no idea where to start. That is until a teammate steps in and invites him to a rather exclusive club. The Bromance Book Club includes some of Nashville's most successful men and one thing they all have in common is a wish to understand the women in their lives. They've decided that the best way to do that is by reading romance novels and they have a cunning plan to help Gavin get Thea back.

I love second chance romances, most books end when a couple gets married but meeting and falling in love is only a small part of a relationship, the hardest part is keeping that marriage alive. Thea and Gavin met and married very quickly after an accidental pregnancy, it's obvious that they were very in love but meeting, getting married and having twin daughters all in just over a year is a lot to deal with for any couple. Especially when you consider that Gavin's job has him travelling a lot and leaving Thea at home basically acting like a single parent. They love each other and they both adore their daughters but it's not so surprising that their relationship has hit a tough spot. Thea feels abandoned and uncared for while Gavin is hurt and humiliated when he realises that he's never really been able to satisfy Thea in bed and it's the final straw that broke the camel's back.

I really enjoyed seeing how hard Gavin was willing to work to win back his wife, he's really reluctant to even consider reading a romance novel at first but at the same time he doesn't want to lose his wife so he decides anything is worth a shot. The camaraderie amongst the guys from book club was just perfect, the banter had me laughing out loud and they made so many clever observations on Gavin and Thea's relationship. Thea was great too, she was learning to become independent and knew that she didn't need a man in her life to be happy but that doesn't mean she doesn't still love Gavin, she was just reluctant to let him back into her life in case she got hurt again. Once Gavin started dialling up the tension between them you could cut the chemistry with a knife and I was left wanting to shove the two of them into a bedroom together so he could practice his new skills.

It’s been a while since a book last kept me up until 5am but this was definitely a one sitting read and I couldn't put it down no matter how tired I got. Laugh out loud funny, great characters, a believable second chance romance and strong feminist themes, The Bromance Book Club has it all and Lyssa Kay Adams has earned herself a new fan. I'm ridiculously excited that the next book, Undercover Bromance, is going to be about Mack and Liv so it's an automatic preorder for me!