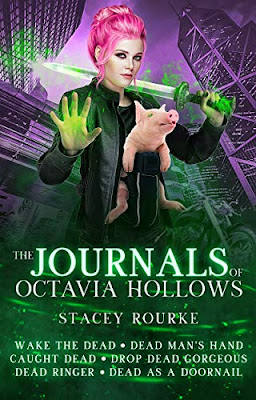 With a touch of her hand, Octavia Hollows can restore life. Yet, she couldn’t save the man she loved from the horrific accident that stole him from her. Octavia thought she could outrun the pain, but ghosts from the past refuse to be silenced. Out of options, she chooses to retrace her wayward journey across the country in search of answers. Surrounded by baffling mysteries of the undead, what she learns about herself along the way might become her greatest weapon.

"This is Rourke at her finest: sassy and completely unapologetic. Proving again why she's a powerhouse in this industry."
-USA Today Best Selling Author Rue Volley

"This book has it all: a kickass heroine, loads of action... and a pig named Bacon."
-NYT & USA Today Best Selling Author Karen Lynch

Review:
This book is actually a collection of the first 6 novellas in the Octavia Hollows series by Stacey Rourke. I listened to the audiobook which narrated by Brenda Scott Wlazlo who I thought did a brilliant job with the different character voices. I often find my mind drifts when I'm listening to audiobooks but she did a great job of holding my attention and I ended up devouring the whole series far faster than I usually listen to audiobooks.

I'll talk about each one separately below but lets start with a brief overview of the series. Octavia is a necromancer with a rather unusual ability. Rather than raising a zombie like creature she is actually able to restore a dead body to its original healthy state and the person she raises is effectively given a whole new chance at life. Her life was turned upside down by the death of her fiancé Elba, that wouldn't usually be a big problem for her but when someone steals his body before she can reanimate him it all goes to hell. Now Octavia's only focus in life is to try and figure out where Elba's body is so that she can bring him back from the dead.

This was a fun and light hearted urban fantasy series that I couldn't read fast enough and I really, really hope that Stacey Rourke decides to write more stories set in this world. 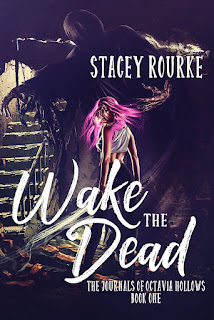 This is a great introduction to Octavia and this world. We get to find out about her ability to raise the dead and meet the most adorable sidekick in her pet pig called Bacon. The story starts with Octavia retracing her steps to Seattle looking for clues about Elba's missing body. While there she is asked for help by a desperate family whose children both seem to be dying. Add in a dead nurse, a visit to the morgue and a dangerous curse and Octavia is going to need to keep her wits about her if she wants to survive this adventure.

We only find out a little about Octavia's past here but we start to understand how alone she has been since falling out with the Coven who raised her until she was 16. 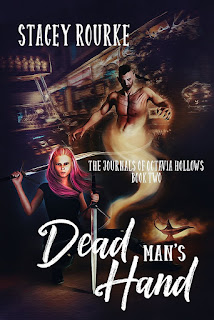 The second story sees Octavia retrace her steps to Las Vegas where she's hoping her old boss might have some answers for her about the man who is stalking her. We get to see Bacon cause chaos on a construction site before Octavia gets herself caught up in a new supernatural case after she reanimates an ex gambler who was burned alive. She's trying to stay under the radar of her Coven, dodge the police and a mob hitman while trying to figure out who is behind the murders so it's probably no surprise that things get a little crazy.

I'm really enjoying getting to know Octavia, she may be on a mission but that never stops her from trying to help others along the way. 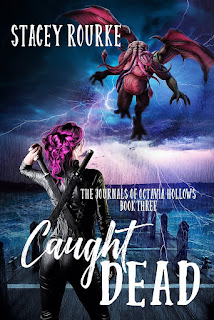 The next stop of Octavia's journey sees her in Galveston, Texas. She's still searching for Elba's body but at the same time she's also trying to find out more about the mysterious stalker who seems to be shadowing her every move. While here she witnesses a body being recovered from a fishing net but he's too far gone even for her magic abilities. Unable to ask the victim directly about his murder she has to do a bit more digging on her own here and soon gets caught up in a tale of sea monsters.

This story gives us a lot more information about Octavia's past as she uncovers things about herself and her family that she'd never heard of before. She was an orphan before the Coven took her in but this gives her a chance to find out about the parents she doesn't even remember. It ends on quite a cliffhanger so I was really pleased that I had the entire series on hand ready to continue! 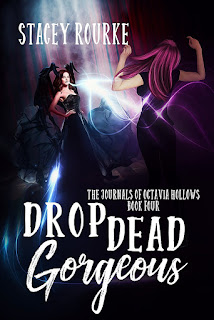 After her abduction in the previous story Octavia is still at the mercy of a cold blooded siren who would happily see her dead. With Bacon and her new friend Squidface being held hostage and used against her Octavia didn't have much choice but to agree to travel to meet the rest of the siren pod. The last thing she's expecting is to find them running a travelling beauty pageant where they target pervy old men to feed from but it's actually a pretty perfect way for the sirens to feed without going on a killing spree.

Octavia finds herself caught up in siren politics after stumbling across a double homicide and she'll have to keep her wits about her if she wants to save her friends in time. This ends in another cliffhanger so again I was ready to dive straight into the next story. 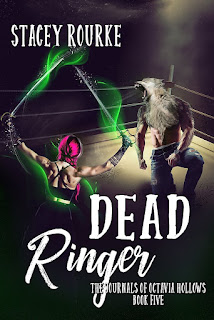 Knowing that her stalker has abducted her entire coven has put Octavia's hunt for Elba's body on hold. She will do anything to save the women who raised her and her search for them begins in New Orleans. Retracing her steps seems to be working well for her so far so she heads back to the boxing gym she used to work at. When she realises her old boss and one of the new fighters Reid have got themselves in some kind of trouble with an underground fight club she knows she has to step in and help but she's definitely going to end up with more than she bargained for this time.

All the way through this series I've been rooting for Octavia to track down Elba and bring him back to life but for the first time I'm starting to wonder whether that's actually the best option for her. She had some great chemistry going on with Reid so although nothing has really happened there so far I find myself almost hoping that will change in the future. We're definitely getting closer to a resolution one way or the other when it comes to Elba though so I couldn't dive into the final book fast enough. 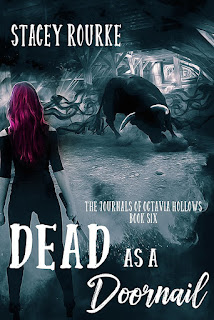 Dead as a Doornail

Her journey has come full circle and now Octavia is back in Tallahassee, Florida, the place where Elba died and where her stalker is now holding her coven captive. Reid has travelled with her wanting to help her and pay back the debt he feels he owes her but her focus remains on finding Elba's body and rescuing her coven.

I'm not going to say too much about this final instalment because I don't want to give spoilers but I will say I was really happy with the way this series ended (although I'm still hoping for more in the future!). This was an intense part of Octavia's journey, she has to face some terrible choices and is forced to face up to both her past and what she wants from her future.

I had so much fun reading this series, I ended up devouring all 6 novellas in less than 24 hours because they kept me totally hooked from beginning to end. I loved the colourful characters and the humour and while this may have been my first Stacey Rourke series it definitely won't be the last!