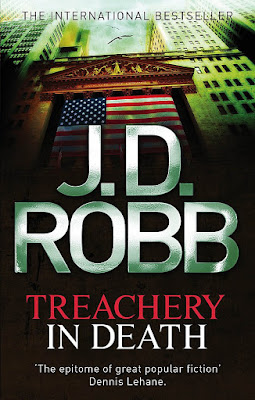 'There's another body on a slab, Dallas. Dirty cop or not, he's dead, and she's responsible. She has to be shut downbefore she decides to clean house again.'

Lieutenant Eve Dallas is about to come up against her most formidable criminal yet: Lieutenant Renee Oberman, daughter of a New York Police legend. After eighteen years on the force, Oberman is efficient, decorated - and utterly corrupt.

When Eve's partner Peabody overhears a damning conversation between Oberman and one of her flunkies, Peabody, Eve and her husband Roarke are soon on the case.

Together they must find the hard evidence needed to bring Oberman and all her dirty cops down - knowing all the while that she will kill anyone who gets in her way.

Review:
Eve deals with murderers every day, she sees evil in all it's forms and she has dedicated her life to stopping it so there is very little that makes her as angry as the idea of a corrupt cop. Let alone a whole squad full of them. When Peabody overhears a conversation between Lieutenant Renee Oberman and one of her lackeys where they are arranging the murder of one of their informants she goes straight to Eve for help. But Oberman is a decorated officer with eighteen years of service to the NYPSD and her father is still a legend even after his retirement. Making any kind of allegations without having serious evidence to back them up would lead to all sorts of political fallout but going up against someone so experienced, and so obviously willing to kill anyone who stands in their way, makes this the most dangerous case Eve and Peabody have worked yet.

I know you're probably sick of hearing me rave about this series by now but these books just keep getting better and better and Treachery in Death was one of my favourites so far. There is such a sense of foreboding while you're reading and there were honestly times I was worried that not all of my favourite characters would survive. This is the case of a lifetime, not only is Eve pitting herself against a fellow Lieutenant but she's also trying to root out any other members of Oberman's squad who are dirty. She has the backing of her team and her superiors but everything has to be done totally by the book and there is no margin for errors.

We've seen Eve throw herself into danger more times than I can count but I will never tire of seeing her pit herself against an intelligent enemy and still manage to remain one step ahead. Alongside the fabulous hunt for corrupt cops Eve still has other cases to work and we get to see her show once again how great she is at her job but also what a fantastic leader she is. She works hard to make sure her squad are the best at what they do and to show them that she will always have their backs. While Eve may dealing with a difficult case this book still has all the humour and love of the previous instalments, the fun banter is there with Peabody, McNab, Feeny and the others, Roarke is still pretty much the perfect guy and Eve proves again why she's one of the best cops in NYC.