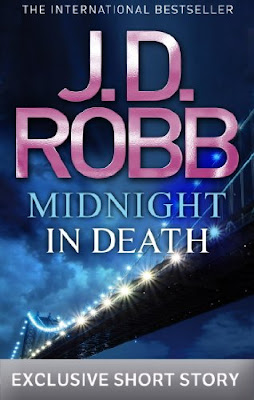 Eve's name has made a Christmas list, but it's not for being naughty or nice. It's for putting a serial killer behind bars. Now he's escaped and has her in his sights.

With her husband, Roarke, at her side, Eve must stop this madman from exacting his bloody vengeance - or die trying...

Set between Holiday in Death and Conspiracy in Death.

Review:
Midnight In Death is available either as an individual ebook, or, as a bind up in print or ebook, that also includes the novella Interlude in Death. I read it as part of the bind up but I'm going to review both stories separately as I'm not far enough along in the series to read the second novella yet.

Midnight in Death is a novella set almost immediately after the end of Holiday in Death. Eve has just solved one major case and now she's hoping to enjoy what's left of the holidays with Roarke. Unfortunately for them both a serial killer has just escaped from prison and the first targets on his list are the people who helped put him behind bars - which includes both Eve and Mira. Eve is going to have to work fast if she wants to save her friend and Roarke isn't going to leave his wife to face this danger alone. Not when she's still recovering from her last case.

This may be shorter than most of the stories in this series but J.D. Robb doesn't skimp on the amount of danger that Eve faces as she tries to bring a murderer to justice, in fact this case is even more personal than most when one of her very few friends, Mira, becomes a target. This serial killer is even more sadistic than most and likes to take his time torturing his victims but even though they know who they are looking for he always seems to be one step ahead meaning this won't be an easy capture.

As always I really enjoyed this story, it's always a treat to spend time with Eve and Roarke and characters like Peabody and McNab add plenty of humour to what could be quite a dark story thanks to the gruesome murders. There isn't much development in Eve's various relationships in this one since it's shorter than normal but there were a couple of stand out moments between her and Mira and also with Roarke that make this well worth reading before moving onto the next full length book in the series. 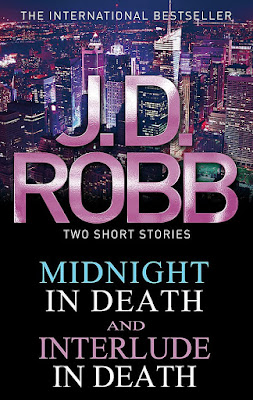 Midnight in Death Kindle Or Bind Up Paperback / Kindle that also includes Interlude in Death: