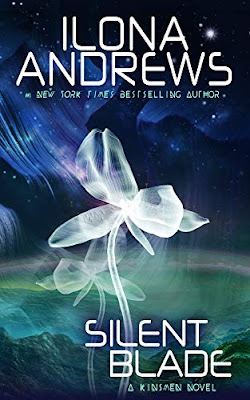 The World of Kinsmen

In a distant, future world Kinsmen—small powerful groups of genetically and technologically advanced families—control vast financial empires. They are their own country, their own rulers, and their only limits are other Kinsmen. The struggle for power is a bloody, full-contact sport: in business, on the battlefield...and sometimes in the bedroom.

On the planet Rada, Meli Galdes’ family is of minor rank, and were relying on her marriage to Celino, the razor-smart, ruthless leader of the powerful Carvanna empire. When he abruptly breaks their engagement, he ruins her family and guarantees that Meli will never marry, as no suitor will oppose the rich and influential Carvannas.

But Meli has a rare, secret, lethal—and valuable—talent. As a melder of energy, she’s capable of severing anything in her path. So she ‘leaves’ her family and trains to become one of the best and most lethal of assassins, all the while covertly guarding her family’s interests. Now she’s ready to quit; but she has one more assignment.

To kill the man who ruined her life.

Review:
I've wanted to read Ilona Andrews' Kinsmen series for a looooooong time now but the second story, Silver Shark, has been unavailable for what seems like forever. Anyway, I was really excited when it was rereleased recently and immediately bought ebook copies of both novellas (and quite possibly preordered the limited edition hardback from Subterranean Press too, I mean I can't help being an IA addict!). Anyway, Silent Blade is a fairly short and fast read that takes us into the distant future and a world where some families are genetically enhanced and have all sorts of interesting abilities. The families with powers are like mafias and each control a certain part of the city, the rivalry between them is huge but they also make alliances, often via arranged marriages.

Meli's family planned to use her to form an alliance with a more powerful family and when she was 10 years old she found herself engaged to Celino but he had no intention of giving up his freedom and went out of his way to break things off. Nothing has gone quite to plan for her ever since then and she ended up distancing herself from the family so she could help them in other ways, like becoming a ruthless assassin who destroyed their enemies by any means possible. When she is offered the opportunity to get revenge on her ex-fiance she jumps at it but once again things don't turn out quite the way she intended them to.

It always amazes me how much Ilona and Gordon can pack into a fairly short story but they did a great job of creating this world and getting me to feel invested in the characters. I definitely think it helped that this feels like an early version of what would go on to become the Hidden Legacy series, it's different in a lot of ways but there are hints that this is where some of the HL world started to form and I enjoyed this starting point. I enjoyed this story a lot, yes things happen fast between Meli and Celino but based on the history between them it felt believable and it was fun to see how Meli had planned her revenge so carefully. If you're looking for a story you can devour in one sitting then I don't think you can go far wrong with this one and I'm looking forward to diving straight into Silver Shark next.