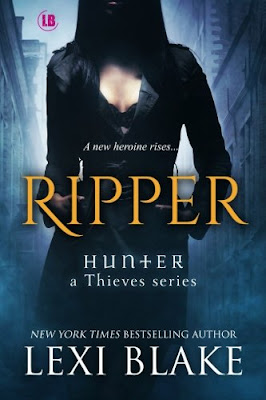 Kelsey Atwood is a private detective with a problem. She came from a family of hunters, growing up on the wrong side of the supernatural world. Tracking down bail jumpers and deadbeat dads may not make her a lot of friends, but it’s a lot safer than the life she turned her back on. She was hoping to escape from the nightmares of her past, but her latest case has brought them right back to her door.

A young woman has gone missing, and she didn’t go willingly. When Kelsey discovers that the girl is actually a shifter, she knows she should drop the case and walk away. But this shifter was a sweet kid, and she’s in serious trouble. More females are missing and the evidence points to a legendary killer. Bodies are piling up, and her case is becoming center stage for a conflict that could shatter the fragile peace between wolves and vampires.

As the hunt intensifies, she finds herself trapped between two men—Gray, a magnetic half-demon lawman, and the ancient vampire Marcus Vorenus. Both men call to her, but when a shocking secret about Kelsey’s family is revealed, it could ruin them all. To stop the killer, she will have to embrace the truth about who—and what—she truly is.

Review:
Ripper is the first book in Lexi Blake's Hunter series, it's set in the same world as her Thieves books with reappearances from some of the original characters so to be honest I think it's best read as a continuation of the original series rather than being used as a starting point but I'm enjoying getting to know a new main character and looking forward to seeing how Kelsey's journey continues.

Kelsey is a character that we've not met before but I thought it was really fun to eventually find out how she tied back to the original group we grew to love in the Thieves books. She was raised by her father to believe all supernatural characters were evil and he used her abilities to help him hunt werewolves and shapeshifters to murder. She was horrified when she realised how wrong he was and she's never forgiven herself for the part she played in his killing spree, even though she was only a child at the time, so has tried to avoid the supernatural world as much as possible since then.

She focuses on her job as a private detective tracking down cheating husbands or bail jumpers but won't touch a case if it involves the supernatural. Until a desperate woman begs for her help to find her missing daughter, a shapeshifter who has vanished in mysterious circumstances. Kelsey is reluctant to get involved but she knows her skills put her in a unique position to help and she finds it really difficult to say no to a desperate mother. As Kelsey starts to investigate she realises that there has been a spate of abductions recently and they all seem to tie back to a local vampire club. It looks like this case won't be as easy as she first assumed and it's going to drag her right back into a world she hoped she'd left behind forever.

After loving the Thieves series I had really high hopes for this spin off and I do think it has a lot of potential but there were a couple of big issues I had with this first book. Firstly was the pace of the relationship that develops between Kelsey and the half-demon Gray. He is a friend of her brother's who has apparently been interested in her for a long time but things between them move at a ridiculously fast pace so we miss out on all the build up that is usually half the fun of a romance story. There were reasons for this that were revealed later on in the book but I still didn't like it and Gray's overbearing possessiveness was a bit of a sticking point. I don't dislike his character but I'm not at the point where I'm rooting for him so he's going to have to change his attitude if he wants to win me around. It's clear that vampire Marcus (who I already loved from the original books) also has an interest in Kelsey so I don't think the romance side of the story is sorted yet, I'm kind of hoping for a menage relationship like we got with Zoey, Danny & Dev but I'm not sure if either Gray or Marcus would be up for that.

The other thing that really upset me about this was how badly everyone treats Kelsey, nearly everyone in her life is keeping secrets from her, using her in some way or manipulating her to do what they want her to do. By the end of the story I was angry with pretty much everyone but especially at Danny and Dev which was really upsetting because I've always loved those two in the past. I couldn't believe the way Danny treated Kelsey, it ruined my opinion of him and kind of spoiled all the happy feelings I'd been having at seeing some of my favourite characters make a reappearance. You know Danny is behaving badly when even Zack, who has always his followed orders without question, and Marcus, who has been his number one supporter from day one, go against him!

I am going to continue reading the series but in the next book I REALLY need to see an attitude adjustment from Danny, he's got some serious making up to do after this book. I'd also like whatever relationship Kelsey decides to embark on to be with a man who can respect her without trying to control her in any way. There needs to be some proper slow-build romance for her and if that's with Gray he's going to have to work hard to earn her trust back. What I'm most looking forward to is seeing Kelsey come to terms with the revelations about who and what she is, she's going to have to learn how her abilities work and then I want to see her take back control of her own fate and not let Danny get away with using her like he's currently trying to.