Review: She Will Be My Goddess - Lexi Blake 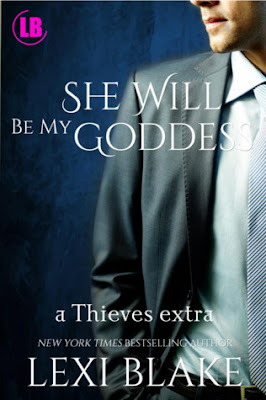 Thanks for joining me for this series of vignettes featuring the men of Thieves. We all know Zoey’s point of view, but I thought it would be fun to take key scenes from the series and rewrite them from the men’s point of view. I hope you enjoy seeing the series in a different light. I’m enjoying playing around with all of Z’s guys!

This is a scene from Steal the Light. It takes place at the end of the book after Zoey has resolved the problems with Lucas Halfer. Daniel has chosen to leave Zoey behind when he’s forced to go to Paris and she’s confused and alone. This scene is from Dev’s point of view. Devinshea knows he’s madly in love with Zoey, but he’s waited. He’s worried for weeks that she’ll choose Daniel and he’ll be alone again. In this scene, Zoey makes her choice and Dev’s fantasy comes alive . . . with one small missing piece . . .

Review:
She Will Be My Goddess is a short scene from Steal the Light but written from Dev's point of view rather than Zoey's. If you sign up for Lexi Blake's website you'll get a link to download this and You Will Call Me Master (another short scene but retold from Daniel's POV) for free. Neither of these shorts will make much sense to you if you haven't read Steal the Light first but for fans of the series it's nice to get a chance to see a tiny portion of the story from the guy's points of view.

This particular scene is from the end of Steal the Light where Daniel has left Zoey behind to go with the vampire council. Zoey has been struggling with her feelings for both guys but she's realised that it's finally time for her to let Daniel go and to perhaps consider the possibly of giving Dev a chance. I enjoyed seeing this scene from Dev's point of view and hope Lexi Blake decides to give us more snippets like this in the future from some of the other characters in the series.

Source: Received for free via the author's newsletter