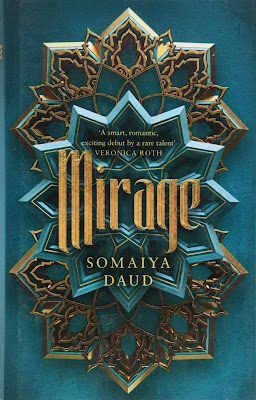 The crown of Dihya had been stripped from me, my face changed, my body broken.
But I was not a slave and I was not a spare.
I was my mother's daughter, and I would survive and endure. I would find my way back home.

In a star system dominated by the brutal Vathek empire, eighteen-year-old Amani is a dreamer. She dreams of what life was like before the occupation and receiving a sign that one day, she, too, will have adventures, and travel beyond her isolated moon.

But when adventure comes for Amani, it is not what she expects. She is kidnapped by the government and taken in secret to the royal palace. There, she discovers that she is nearly identical to the cruel half-Vathek Princess Maram. The princess is so hated by her conquered people that she requires a body double to appear in public, ready to die in her place.

As Amani is forced into her new role, she can't help but enjoy the palace's beauty - and her time with the princess' fiancé, Idris. But the glitter of the royal court belies a world of violence and fear, and she soon realises that one wrong move could lead to her death...

Review:
Everyone Amani knows is struggling to survive under a brutal occupation by the Vathek Empire, they are punished for the slightest thing, their culture is slowly being stripped from them and they have become little more than slaves who work hard only to have their crops and produce taken from them by the Vathek elite. Life is hard and although Amani has always dreamed of adventure the last thing she ever wanted was to be forced away from her family and taken to the Vathek capital. It's only when she arrives at the palace that she realises why she was taken, Amani is a perfect double for the Vathek princess and she is there to take over Maram's public appearances. Maram is extremely disliked even among her own people and in constant danger so Amani is going to be the one who takes all the risks putting her own life on the line to protect Maram. So now Amani must learn to mimic her enemy and all it will take is one tiny slip up and her life will be forfeit.

Mirage is a beautifully written debut by Somaiya Daud, the Moroccan inspired setting is rich in detail and described so well you'll feel like you're actually there. The story itself is a fairly slow paced one but with writing this lovely that really doesn't matter and I enjoyed getting the chance to really get to know the characters well. It's very easy to relate to Amani but I was surprised at how interesting Maram's character is too. She's a very angry and bitter girl who has a mean streak a mile wide and I'm never going to be rooting for her as a hero but she's far more complex than most bad guys and the slowly building alliance between her and Amani was really interesting to see. Then you have Idris, Maram's fiancé, whom Amani is forced to spend a lot of time with at public appearances. There seems to be the start of a slow build romance there but he has his own motives for everything he does so it's hard to tell what the outcome will be.

I really enjoyed this story and I'm definitely looking forward to seeing where Somaiya Daud takes things throughout the rest of the series.