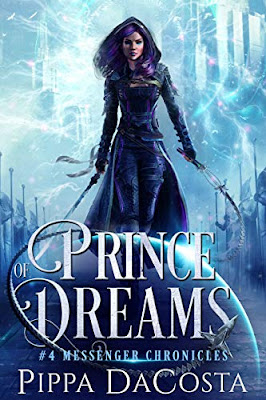 “Oh what a tangled web we weave…”

Kesh fled Faerie as a queen killer. Now she returns as the Faerie King’s secret obsession. But on Faerie, nothing is as it seems, not even Kesh herself.

With days to stop Arran’s execution and the stoic guardian, Sirius, as her constant shadow, Kesh must weave her lies deep within Faerie’s courts where magic and whispers combine and conspire. Soon, Kesh learns there is more at stake than Arran’s life. Faerie is dying. Oberon’s reign is crumbling. The time to strike against the fae is now. But with Talen, Kellee and Sota a thousand light-years away, Kesh cannot succeed alone…

Beneath the courtly politics, the glittering facades, and the King’s fragile hold on his people, the Dreamweaver is locked in eternal slumber, dreaming of the day his Queen of Hearts will set him free… because he knows, Kesh Lasota has no other choice.

Kesh survived the Dreamweaver once before. Now all she has to do is control him.

But Faerie's Dreamweaver has other ideas for the peoples’ Messenger. He knows who, and what Kesh really is and he has every intention of using her to make all his dreams come true.

He takes your mind, makes it his, takes your soul, makes you cruel.
Dare you answer the Dreamweaver’s call?

Review:
Following on from the end of the last book Prince of Dreams sees Kesh back in Faerie with Sirius, trying to find a way to stop Arran's execution, while Kellee and Talen are still back in Hallow trying to figure out a way to get to Faerie to rescue her. With both Oberon and Eledan trying to ensure Kesh's loyalty her newfound resolve to be the protector of Hallow and free her own people is being severely put to the test but she's come a long way from the girl we met at the beginning of the series and she's stronger than either of them imagine.

This series is just getting better and better and I loved the chance to explore more of Faerie and get to know Oberon a bit better. He is definitely not a character to be trusted but he's had a huge influence over Kesh's entire life and he's very good at pulling her strings. Not quite as good as Eledan though and he is doing his best to play her again now as he makes a bid for freedom. Kesh will do anything to save Arran but she could be making a huge mistake by placing her trust in Eledan so things are definitely about to get interesting.

I have to admit I missed seeing Kesh spending time with Kellee and Talen but I loved getting to know Sirius better. There is a lot more to his character than we first realised and I'm enjoying peeling back a few of those layers to see what is underneath. I also loved getting some of the story from Kellee's point of view and was glad to see him and Talen working together towards a common goal. They seem to have come to an understanding now and they're quite a formidable team when they're on the same page.

There is so much going on in this story that I was on the edge of my seat while reading it. This series is full of plots within plots and you can never quite tell what twist Pippa DaCosta will throw at us next so it's always a little worrying but that also makes it more fun to read. Kesh's harem is growing and there has been some fantastic relationship development across the series but I'm a little nervous that not everyone is going to get the happy ending that they deserve. I know which characters I'm rooting for though and I hope I don't end up completely heartbroken in the end - I know there was already one heart stopping moment here that nearly broke both Kesh and me!

I absolutely can't wait for the next instalment and I'm already a little devastated that it will be the final book in the series. I'm definitely not ready to say goodbye to these characters or this world yet but I trust Pippa to end it on a high note.