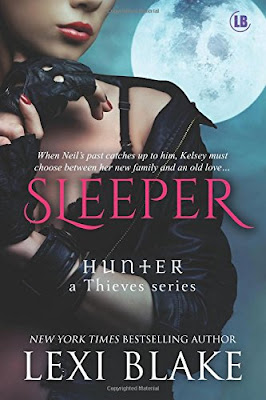 When Neil’s past catches up to him, Kelsey must choose between her new family and an old love…

With tensions rising between the Council and demonkind, Kelsey finds herself investigating a series of murders that threaten the fragile truce between them. If she can’t stop these killings soon, they could ignite a fire sure to burn the supernatural world down.

Unfortunately for her, Kelsey’s problems don’t stop with a pile of dead halflings. Her connection with Marcus is frayed at best, and Gray hasn’t been heard from in months. Her only semblance of peace comes from a new man in her life. When Gray storms back into the picture, her love life goes from incredibly complicated to apocalyptic.

Just as Kelsey begins to unravel the mystery, the forces of Heaven decide to take an interest in her actions. Outclassed with these powers in play, Kelsey knows that one misstep could leave the human and supernatural worlds in ashes.

Review:
After a rocky start to the Hunter spin off from Lexi Blake's Thieves series I have to say I'm now really enjoying Kelsey's story. Addict was the turning point for me but Sleeper ended up being even better and it definitely left me excited to read more about Kelsey and her ever more complicated life.

As the contract between demons and vampires is very close to running out completely tensions between the two groups are high, especially since vampire king refuses to allow the council to start to negotiate new terms. Kelsey has more reasons than most to have a grudge against the demons but she knows how precarious the balance is between the different supernatural groups and when a murderer starts targeting half-breeds she knows it's her job as Nex Aparatus to get to the bottom of it. Of course she's also busy with her side quest to find a way to destroy her nemesis Nemcox but he's turning out to be tricky to track down.

I've never been a big fan of Kelsey and Marcus as a couple, their connection always felt forced to me, more down to the bond because he is her trainer than any real, long lasting attraction so I was happy with the way their relationship started to change at the beginning of this story. I like them both as individuals and really, really want to see Marcus get his own book and a HEA, but I like Kelsey so much more when she's with Trent and Gray, either individually or as an eventual triad. Things have gotten really complicated with Gray since he was given his prophecy powers and walked away from her yet again but it's much easier when it comes to Trent and he is obviously willing to sacrifice a lot to be with her.

This story isn't just about the relationships though, there are some brilliant moments between Kelsey and Lee in particular but I'm also enjoying seeing the old gang now they're back to their old selves. We were left with a lot of questions about Neil at the end of the original Thieves series and it was great to finally get some answers here about what had happened to him all those years ago. I also think the next book is going to be even more exciting now that a certain wizard has decided to put in a reappearance, I suspect he's going to be causing all kinds of trouble and I can't wait to see how it all plays out!