Earlier this week I was really excited to be invited to the Walker YA Wonderland blogger event to meet some of their authors and find out all about some of the exciting books they have coming out in 2019. I always love Walker's events and this was no exception, we got to meet some fantastic authors and I'm so excited to start reading all the books I came home with!

The first author we got to hear from was Lauren James who was talking about her upcoming book The Quiet at the End of the World, we actually had a sneaky early copy of this one in our goodie bags and I can't wait to read it. Lauren was inspired to write this story by the idea that eventually the human race is going to go extinct which means that at some point (hopefully in the distant future!) there will be a last living human. Just imagine being the one of the last few people alive and how knowing that would affect you.

I've been lucky enough to meet Lauren a few times now and I love how passionate she is about all things science but particularly women in science. All of her stories have some scientific basis behind them and at the event she was talking about physical evolution but also the way languages change and how difficult it can be to interpret messages left thousands of years ago. Imagine how we're going to warn people 10,000 years in the future to avoid the nuclear waste that we've buried today, will they even recognise the symbols we use for toxic waste? 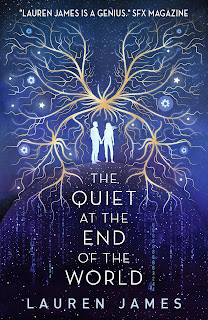 About The Quiet at the End of the World:

How far would you go to save those you love? Lowrie and Shen are the youngest people on the planet after a virus caused global infertility. Closeted in a pocket of London and doted upon by a small, ageing community, the pair spend their days mudlarking and looking for treasure – until a secret is uncovered that threatens not only their family but humanity’s entire existence. Now Lowrie and Shen face an impossible choice: in the quiet at the end of the world, they must decide what to sacrifice to save the whole human race...

The second author to speak was Zoe Marriott who was there to tell us all about The Hand, the Eye and the Heart, her upcoming novel inspired by Mulan and set in a fantasy world inspired by Chinese history, especially Tang Dynasty. Zoe wanted to be clear that it isn't a straight Mulan retelling but there are similarities with the character's journey. Zhilan is also gender fluid which I think is fantastic. You can read all about Zoe's inspiration for the story on her blog here.

I've been a huge fan of Zoe's books for years now so I'm ridiculously excited for this book and it was really cool to get to see the cover revealed for the first time at the event. Walker always put so much effort into their cover designs and you can really see that here! 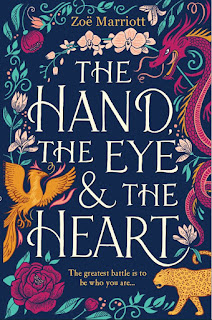 About The Hand, the Eye and the Heart:

Zhilan was assigned female at birth. Despite a gift for illusions, they know they are destined to live out their life within the confines of the women’s quarter. But when civil war sets the empire aflame, Zhilan is determined save their disabled father from the battlefield. By taking his place. Surviving brutal army training as a boy – Zhi – is only the first challenge. In the glittering court of the Land of Dragons, love and betrayal are two sides of the same smile, and soon the fate of a nation rests on Zhi’s shoulders. But to win, they must decide where their heart truly belongs…


Next up was Tom Pollock who told us all about his upcoming novel Heartstream. It's not due to be published until next July and is so new that it doesn't have a cover or official blurb yet but it sounds like it's going to be a fab read.

The story is set in the not too distant future where technology allows people to share their actual emotions online just like we currently share our thoughts and feelings via social media. Tom was inspired to write the story after watching vloggers and thinking about how they all create an online persona that their followers can relate to. The main character ends up becoming famous after sharing their emotions while their mother was dying but it all goes horribly wrong when they come home from the funeral to find someone inside their home holding a bomb! Heartstream sounds like it's going to be deliciously twisty & I can't wait to read it. 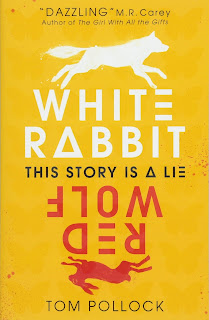 About Tom's last novel White Rabbit, Red Wolf (since I can't share a blurb or cover for for Hearstream yet):

A taut thriller about murder, maths and the mind. Peter Blankman is afraid of everything and must confront unimaginable terror when his mother is attacked.

Seventeen-year-old Peter Blankman is a maths prodigy. He also suffers from severe panic attacks. Afraid of everything, he finds solace in the orderly and logical world of mathematics and in the love of his family: his scientist mum and his tough twin sister Bel, as well as Ingrid, his only friend. However, when his mother is found stabbed before an award ceremony and his sister is nowhere to be found, Pete is dragged into a world of espionage and violence where state and family secrets intertwine. Armed only with his extraordinary analytical skills, Peter may just discover that his biggest weakness is his greatest strength.

Last but definitely not least was Neal Shusterman talking about his latest novel Dry (written with his son Jarrod) and also The Toll, the final book in the Arc of a Scythe trilogy which is due to publish next September. I absolutely LOVED Scythe (read my review) and Thunderhead (read my review) so I can't wait to get my hands on The Toll and the hints we were given about what to expect just made me even more excited about it! It looks like there have been all kinds of hints woven into the first book, right down to Scythe Goddard's name, and I can't wait to see how everything comes together in the finale.

Neal talked about how bored he was with YA dystopian stories at the time he was getting ready to start writing Scythe and how he wanted to do something completely different. The Arc of a Scythe trilogy was supposed to be about what would happen if everything went right in the world rather than if it all went horribly wrong but if we were able to cure diseases and make people practically immortal then it would cause all kinds of problems with overpopulation. Eventually that lead to the idea of the Scythes who were supposed to be unbiased and willing to do an awful job to keep society running smoothly, interestingly enough they were actually inspired by the Jedi! 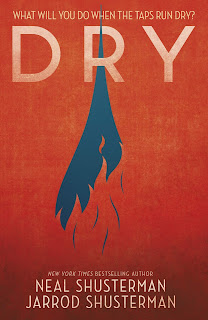 When the California drought escalates to catastrophic proportions, one teen is forced to make life and death decisions in this harrowing story of survival from New York Times bestselling author Neal Shusterman and Jarrod Shusterman.

The drought – or the Tap-Out, as everyone calls it – has been going on for a while now. Everyone’s lives have become an endless list of don’ts: don’t water the lawn, don’t fill up your pool, don’t take long showers.

Until the taps run dry.

Suddenly, Alyssa’s quiet suburban street spirals into a warzone of desperation; neighbours and families turned against each other on the hunt for water. And when her parents don’t return and her life – and the life of her brother – is threatened, Alyssa has to make impossible choices if she’s going to survive.

Dry is another fantastic book from Neal, cowritten with his son Jarrod, and you can read my review here.

After hearing all of the authors talk about their books, along with listening to some of the Walker editors and publicity team talking about other upcoming books (another highlight to watch out for is definitely On the Come Up by Angie Thomas due in February 2019!) we had time to mingle with the authors and other bloggers while getting our books signed and enjoying a few tasty nibbles.

I want to say a HUGE thank you to everyone at Walker for organising such a brilliant event and allowing me to tag along. The hardest part about coming home with so many fab books is trying to decide which one to read first but I'm particularly excited about the ones I've mentioned in this post so watch out for reviews coming as soon as I can!
at 18:00