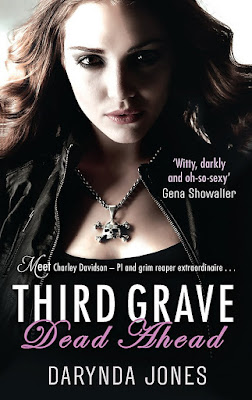 Paranormal private eye. Grim reaper extraordinaire. Whatever. Charley Davidson is back! And she's drinking copious amounts of caffeine to stay awake because every time she closes her eyes she sees him: Reyes Farrow, the part-human, part-supermodel son of Satan.

Granted she did imprison Reyes for all eternity, but how is she supposed to solve a missing-persons case, deal with an ego-driven doctor, calm her curmudgeonly dad, and take on a motorcycle gang hell-bent on murder when the devil's son just won't give up on his plan of seduction.....and revenge?

Review:
Charley has been hired to find a missing woman but really that's the least of her problems considering she's just found out that the man Reyes' has spent the last 10 years in prison for killing may actually be alive after all. Determined to track down Earl Walker and get Reyes out of lock up she's taking more risks than ever, and she's doing it in a state of exhaustion as she tries to stay awake to keep Reyes out of her head. Ever since she bound him to his corporeal body the only time she sees Reyes is when she's sleeping and let's just say he's not too happy with her right now and she'd rather avoid having to deal with his anger. Yes, life is definitely complicated.

This series just gets better and better and I can't believe I left it so long to go back to it. The only advantage of that is that the entire series has been published now so I don't have to wait months for each new book to release. You can definitely expect me to binge the rest of them over the next few weeks! I love Charley, she's such a fun and sarcastic character but she's also fiercely loyal and would do anything to protect the people she cares about. I love her friendship with Cookie and the great relationship she has with her uncle Bob but I have to admit I'm really getting sick of seeing how badly her dad treats her. He crossed a line in the previous book but in this one he goes a step further and if I was Charley I'd seriously be considering whether I even wanted him in my life anymore. I'm sure he has a lot of guilty feelings about using her abilities when she was younger to help him solve crimes but his attempts to protect her now are totally over the top and unwarranted.

In this book we start to get more of an insight into Charley's abilities and what that might hold for her future, she still has a lot of learning to do about her powers though and I'm looking forward to learning more alongside her. We also finally start to learn more about Reyes' upbringing and his motives, he's still very much a man of mystery but for some reason I love his character and I can't wait to unravel more of his secrets. There are a lot of revelations in this book that are going to have a knock on effect as the series continues so I have a feeling that the next book is going to be even more exciting.

These stories have plenty of humour but also tons of action and more than a little danger as Charley constantly seems to find herself in danger. There was one moment that absolutely broke my heart and was totally unexpected but overall I was extremely happy with the direction things are headed in and I'm looking forward to reading more.