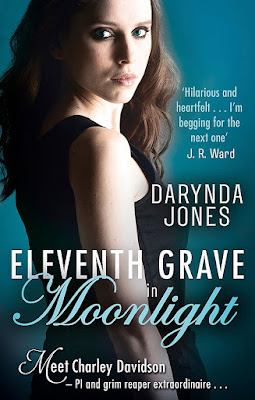 As a part time Private Investigator and full-time Grim Reaper, Charley has to balance the good, the bad, the undead, and those who want her dead.

Now Charley is learning to make peace with the fact that she is a goddess with all kinds of power and that her own daughter has been born to save the world from total destruction. The forces of hell are determined to see Charley banished forever to the darkest corners of another dimension but with the son of Satan himself as her husband, maybe Charley can find a way to have her happily ever after after all.

Review:
This review is deliberately going to be short because after THAT ENDING I have to go and start the next book as fast as humanly possible. This is where Charley's superpowers would come in handy but sadly I'm not a god.

In this book we see Charley investigating the couple who stole Reyes as a baby from his birth parents and gave him to the monster Earl Walker. It turns out that Reyes isn't the only child they stole, something that Charley has suspected for a while now but has only just set out to prove. Reyes isn't happy that she's digging into his past again but this time she's been hired by another one of their victims so she can't turn away from someone else who needs her help.

There are plenty of other things going on in this instalment too, there is still a god from Usen on the loose and hunting for Beep, Amber has picked up a crazy stalker who is sending her messages that no thirteen year old girl should ever have to read, Ubie is acting like a madman and has Cookie convinced he's having an affair and Reyes is determined to make Charley learn more about her abilities even if it means throwing her off the top of very tall buildings and hoping she figures things out before she hits the bottom.

The ending though, THAT ENDING!! It really has left me desperate to find out what happens next and I'm so ridiculously glad that I don't have to wait for book twelve to be published. That cliffhanger would probably have killed me if I didn't already have the next book on hand!