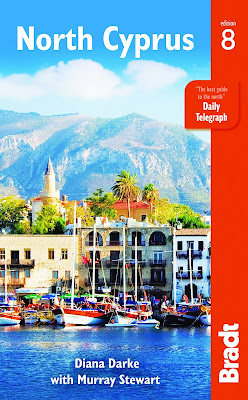 Hike up to Buffavento, stroll through the cloisters of Bellapais Abbey or go barefoot on the golden sands of the Karpas Peninsula. Rugged North Cyprus offers charming unspoilt villages, deserted beaches and hidden monasteries - things of the past in the developed south. Revised and expanded, the eighth edition of North Cyprus reveals churches, castles, classical ruins and newly accessible sites. Accompanying this is an entertaining and in-depth overview of the ancient and modern history that has shaped this complex and divided island.

Review:
I'll admit that I usually go straight for Lonely Planet books when I'm looking for travel guides but since they don't have one specifically for North Cyprus (just for the island as a whole) I ended up choosing this Bradt one and being very happy with it.

This is a pretty comprehensive guide to North Cyprus full of interesting background information on the island. There is so much history to uncover in Cyprus and this guide includes a timeline of important events dating from 6000BC right through to more recent years. The division between the Turkish controlled North and Greek controlled South of the island is complex and versions of events are likely to differ depending on whether you ask someone from Greek or Turkish descent but the information included in this guide is factual and seems pretty non-biased which I appreciated.

As well as the history of the island you'll also find information on the types of flora and fauna you can expect to see, detailed information about the different regions in the North and notes about most of the main tourist attractions as well as the usual tourist tips and info you'd expect from a tour guide and some handy Turkish language hints. There are countless mosques, churches, monasteries, castles and even Roman ruins to explore, beautiful beaches (I wish we'd travelled at the right time to see the turtles who come every year to lay their eggs), wonderful scenery and friendly people. The North side of the island is much poorer than the South so they rely on tourism to boost their economy and because of that they're really very warm and welcoming.

Cyprus really is a beautiful island and the North is far less built up than the South which actually made it a really nice place to visit, you won't find western chains of shops and restaurants there (although everything is still priced in Euros so I'd recommend taking those not Turkish Lira) and it's far less unspoiled than most tourist destinations. This was really noticeable in the capital city Lefkoşa (Turkish) / Nicosia (Greek) which is split in two by the green line, a barbwire barricaded no mans land that marks the boarder between the North and South. If you have your passport you can walk across the boarder in certain places after passing through two checkpoints and as soon as you cross to the Greek south side you'll see an immediate difference spotting chains like Starbucks and KFC that are completely absent in the North.

This guide was published in 2015 so I expect some of the hotel and restaurant information is probably out of date by now but we did a week long coach touring trip that took us around most of the North so we didn't really need that information anyway. It did include information about most of the places we visited and although our tour guide was extremely knowledgable it was nice to be able to look up extra information in the book too and have it as a reference guide to look back on now we're home. If you're looking for a guide for Northern Cyprus then I'd highly recommend this one and the island itself is well worth paying a visit to.