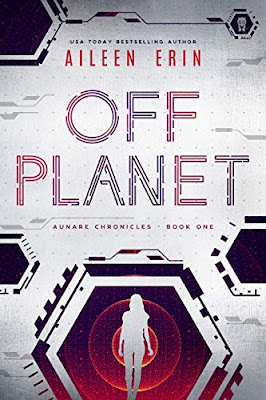 In an all-too-plausible future where corporate conglomerates have left the world’s governments in shambles, anyone with means has left the polluted Earth for the promise of a better life on a SpaceTech owned colony among the stars.

Maité Martinez is the daughter of an Earther Latina and a powerful Aunare man, an alien race that SpaceTech sees as a threat to their dominion. When tensions turn violent, Maité finds herself trapped on Earth and forced into hiding.

For over ten years, Maité has stayed hidden, but every minute Maité stays on Earth is one closer to getting caught.

She’s lived on the streets. Gone hungry. And found a way to fight through it all. But one night, while waitressing in a greasy diner, a customer gets handsy with her. She reacts without thinking.

Covered in blood, Maité runs, but it’s not long before SpaceTech finds her…

Arrested and forced into dangerous work detail on a volcano planet, Maité waits for SpaceTech to make their move against the Aunare. She knows that if she can’t somehow find a way to stop them, there will be an interstellar war big enough to end all life in the universe.

There’s only one question: Can Maité prevent the total annihilation of humanity without getting herself killed in the process?

Aunare Chronicles:
Off Planet
Off Balance (2020)

Review:
Set in a future where giant corporation SpaceTech pretty much controls all of the human colonies across the universe this is the story of Maité, a half-human half-aunare young woman who is just trying to live her life in peace. SpaceTech have been trying to start a war with the aunare race for years, starting 10 years ago with the massacre of all aunare people living on planets they controlled, now they'll stop at nothing to destroy an entire species just to keep their control over humanity.

Maité and her mother have been hiding on earth for 10 years hoping that her father, who is a powerful general in the aunare army, will find them and help them get to safety. If Maité is discovered by SpaceTech then it will be a death sentence but it's getting harder and harder to live under the radar. She is so close to freedom when she makes a dreadful mistake, one that could cost her everything. After her arrest she is sentenced to a work detail on a dangerous volcanic planet, every day she comes a little closer to death and if her father's representatives don't get to her in time to save her then war will be inevitable.

I thought Off Planet was a brilliant start to this new series, I've not read anything by Aileen Erin before but after enjoying this so much I think I definitely need to check out some of her backlist. I really liked Maité's character, her aunare blood makes her stronger and faster than most but that's almost more of a curse than a blessing as she's constantly having to try to hide her abilities so that people don't figure out who or what she really is. Her life has been tough but she has a strong bond with her mother and some close friends who are always there for her and even though she's constantly in danger she always tries to help others too.

This is only the first book in the series but we've already met some really interesting characters both human and alien that I want to spend more time with. Roan is like a best friend and brother rolled into one, Declan was sent to save her but to be honest hasn't been all that great at doing the job, she made some interesting allies on Abaddon but I think the person I'm most curious about is Lorne, the aunare who will stop at nothing to rescue her even if that does mean starting a war that could end up killing billions. One thing I'm really hoping is that we're not going to see the formation of a dreaded love triangle though, there were hints that it might end up going in that direction but I really hope the author surprises me and doesn't take the easy drama route.

The world that the author has created is an interesting one, I was fascinated and horrified by the conditions on the volcanic planet so appropriately called Abaddon and I'm really looking forward to finding out more about the aunare home world too. I'm a bit curious about why this is being marketed as YA, Maité is 20 and her friends are all her age or a fair bit older and although the story is appropriate for teens (there's no sex, I didn't notice much in the way of swearing and even when Maité is being tortured it doesn't go into super graphic detail) I would still class this as an adult sci-fi because of the age of the characters and the themes it covers. Maité doesn't think or act like a teenage narrator so the YA label is misleading in my opinion. That really is a minor issue as I think the story will be enjoyed by both teens and adults but I do think it's important to clarify these things correctly. I've already added the next book, Off Balance, to my wish list but it's going to feel like a long wait until it's release next year!