Review: Run to You - Lara Adrian 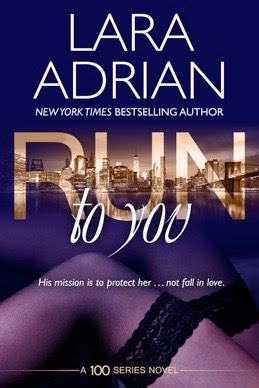 He will do anything to protect her . . . even if it means breaking her heart.

Combat veteran Gabriel Noble survived the war overseas, but the stoic Baine International security specialist is in for the fight of his life when he's tasked with bodyguarding beautiful lingerie designer Evelyn Beckham.

Once a celebrated model, Evelyn Beckham dominated the fashion runways of New York, Paris, and Milan. But life under the lights nearly destroyed her, and at the height of her career she walked away from it all. Now, five years later, Eve’s built a new life at the helm of Manhattan’s premier high-end lingerie boutique, L’opale. Chosen to design the bridal ensemble for billionaire Dominic Baine’s fiancée, Avery Ross, it seems Eve’s stars have finally realigned—until her return to the spotlight thrusts her into the crosshairs of a danger that’s been watching from the shadows, waiting for the chance to strike.

Gabriel Noble didn’t go to war to become a hero, but when he returned from the battlefield in Afghanistan it was with a chest full of medals and a broken body filled with shrapnel. Losing his leg derailed more than Gabe’s career, and when no one else was willing to take a chance on him, Baine International put him on their security team. Now, Gabe would do anything for Dominic Baine—including keeping a covert, protective eye on beautiful Evelyn Beckham as a personal favor to his boss and friend. But keeping Eve safe means keeping her close, and soon the lines between duty and desire begin to blur into a consuming passion too powerful to be denied. With Eve’s life in escalating peril and her faith in him certain to shatter, Gabe will have to risk everything to protect her while facing the most intense fight of his life . . . the battle for Eve’s heart.

Review:
Run to You is the first standalone romance set in the same world as Lara Adrian's 100 Series. If you're familiar with the original trilogy you'll enjoy spotting familiar faces but if you're new to this world then you won't have any problems diving in here as the romance stars a brand new couple and gives them a full happily ever after. There's no worrying about possible cliffhanger endings but we may see this couple again as side characters in future stories.

Evelyn Beckham was an international superstar who modelled all around the world until the lifestyle nearly killed her. Since then she's kept out of the limelight and chosen to focus on building her business designing bespoke lingerie for wealthy clients at her boutique. When she is chosen to design wedding and honeymoon lingerie for Avery Ross she knows this could be a massive boost to her business but when more and more strange things start happening in the boutique it looks like she may be in danger from an unseen enemy.

Gabriel Nobel is a veteran who lost a leg serving in Afghanistan that now works as the head of Baine International's security team. Gabe considers Dominic Baine, and his right hand man Andrew Beckham, friends but also feels he owes them for taking a chance on him and giving him the job he loves. When they ask him to personally keep an eye on Andrew's sister Eve he will to whatever it takes to keep her safe, even if it means keeping secrets that he knows will break her heart.

I was really pleased when I found out Lara Adrian is writing more contemporary romances, as much as I'm addicted to her Midnight Breed world I also really enjoyed Avery and Nick's story and I'm looking forward to getting to know more of the side characters. This book introduces us to Andrew's sister Eve and Nick's head of security Gabe. I'm not sure if we met either of them in the original books but if we did I don't remember them so they definitely weren't major characters and I don't think anyone would have any trouble reading this if they're new to this world.

Eve and Gabe don't exactly hit it off on the right foot, they're both quite fiery personalities who manage to rub each other up completely the wrong way the first time they meet so although the attraction between them is pretty instant neither of them is very keen on acting on it. Eve because she's busy focusing on her career and Gabe because he doesn't want to break the bro-code by going after his friend's younger sister. They're pushed into closer proximity when it appears that Eve's life is in danger but Andrew insists on keeping Eve in the dark about the fact that she may have a stalker so Gabe is forced to hide the fact he's trying to protect her. I have to admit I didn't like the way Andrew did that but because the story is told from both Gabe and Eve's points of view we could see how difficult Gabe found it and that made it easier to forgive him for his actions.

The two characters have a brilliant connection, in a lot of ways they're completely different. They have very different lifestyles and histories but at the same time they're also looking for the same things in life and they suit each other really well. It doesn't hurt that they have fantastic chemistry but they also enjoy spending time together out of the bedroom so their relationship felt totally believable and realistic. My one complaint about the story was that I found it a little too easy to guess who the stalker was but since this is primarily a romance and not a murder mystery that's really a very small niggle. Apart from that I loved getting to catch up with some familiar faces while meeting a whole bunch of new ones, the romance was both sweet and hot and I absolutely flew through this story. I'm looking forward to more books set in this world and already have a whole list of side characters I'm hoping to read about!