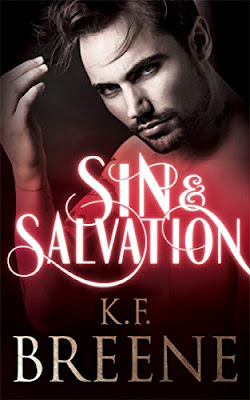 Valens has noticed his two missing employees. It won't be long before he knows who is responsible.

It won't be long before he claims his vengeance.

The race is on. Kieran and Lexi must scrape together an army worthy of taking on the Demigod of San Francisco before he destroys them all.

But Valens isn't Lexi's only problem. Mordecai's rapid recovery has been noticed, and he has once again become a threat to his old pack.

Lexi's little family is in jeopardy of being torn apart, and to save them...she must finally embrace what she is.

Review:
Sin & Salvation is the third (& hopefully not the last!) book in K.F. Breene's Demigod of San Francisco series and it picks up Lexi's story not long after the end of the previous book. Lexi and her wards have been busy training with Kieran and his Six but no matter how much they learn they know they'll never be a match for Kieran's father Valens. They're running out of time though, Valens has noticed he is missing several employees and it won't be long before he realises that Kieran's mother has also been freed. The only question is whether Kieran can pull together enough allies to stand a chance at surviving the final confrontation with Valens.

Obviously this series has been building towards a major battle since the first book but it's a good job Lexi has been training hard because the wait is finally over. Lexi could choose to run but she would never leave Kieran to fight alone and her wards Mordecai and Daisy aren't willing to sit out the fight either. Lexi would prefer to keep her kids out of danger entirely but if Valens wins then nowhere will ever be safe for anyone so their best bet is to win the war.

This book had everything I was hoping for, more romance between Lexi and Kieran, more of the wonderful family dynamics between Lexi and the kids, more of Kieran's Six (including us FINALLY finding out what each of their powers are & boy are there some revelations there!) and even more of Lexi's new ally Bria who adds a lot of humour to the series. We get an epic battle that is going to have far reaching consequences for everyone involved and although this book doesn't end with a cliffhanger I feel like there is still plenty of scope for more stories involving these characters. I'd happily read more books about Lexi and Kieran but I can't help hoping that each of the Six might get a story or two too.