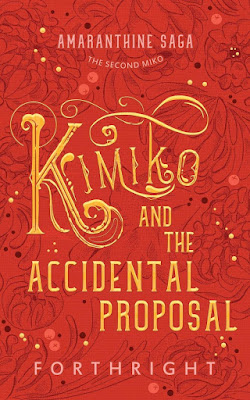 She wasn’t aware of her gift’s significance, yet he expects to be courted.

Kimiko enrolls at the In-between’s prestigious new high school, which is designed to promote the integration of the human and inhuman races. As a reaver, she’s supposed to act as peacemaker, bridging a formidable cultural gap, but the other two members of her triad don’t need any help in that department. Akira and Suuzu have been friends since middle school. Instead, the boys must rally behind Kimiko when she inadvertently initiates a courtship with Eloquence Starmark.

Review:
Let me start by saying that I love the world that Forthright has created with this series, I find the Amaranthine character fascinating and I'm enjoying seeing the bond that forms between them and the not quite human Reavers who have compatible magical abilities. It's also interesting seeing how humans are reacting to their recent discovery that the Amaranthine exist, of course they've been around for centuries, but they were hiding in plain sight until fairly recently so it's all come as quite a shock to the human population.

In order to build relations between the three groups the Reavers and Amaranthine have created a new school where the students will be able to mix and learn from each other. I was absolutely thrilled to discover that Tsumiko's brother Akira and his roommate Suuzu were going to be main characters here and I loved every minute of they were on page. Within class the students have been split into triads containing one human, one Reaver and one Amaranthine per group. Akira and Suuzu make up the human and Amaranthine sides of their triangle and Kimiko is the Reaver who joins them. As a Reaver Kimiko grew up knowing about the Amaranthine and is familiar with the culture so it's her job to help build connections between the human and Amaranthine students.

I really enjoyed spending time with the students, the three I've mentioned are only a small part of the class, we also have some half human / half Amaranthine students and members of each of the Amaranthine clans, including Eloquence Starmark whose father we met in the previous book. Oh and we mustn't forget Michael and Sansa's daughter Isla who was a lot of fun.

It was absolutely hilarious when Kimiko accidentally ended up proposing to Eloquence, the whole misunderstanding was really well written and I was able to understand why both of them decided to give their potential relationship a chance. I was really enjoying learning about Amaranthine courting protocol and seeing Kimiko figure out how she was going to pursue the relationship on her own terms but I have to admit I was a little disappointed we didn't get to see more of that. That side of the story started so well but it ended up getting lost amid too many other plot threads and I was just left wanting more.

There are lots of interesting things happening in this world though and I'm definitely planning on continuing the series when Tamiko and the Two Janitors releases later this year. I hope we get to see more of the students we've already met and I'm REALLY hoping that we'll get a book staring Akira and Suuzu at some point in the series.