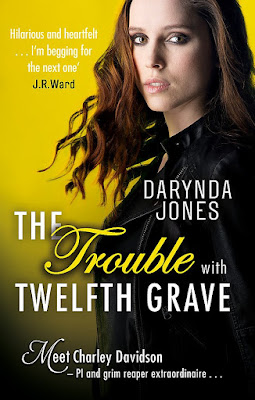 Ever since Reyes escaped from a hell dimension in which Charley accidently trapped him, the son of Satan has been brimstone-bent on destroying the world his heavenly Brother created. His volatile tendencies have put Charley in a bit of a pickle. But that’s not the only briny vegetable on her plate. While trying to domesticate the feral being that used to be her husband, she also has to deal with her everyday life of annoying all manner of beings—some corporeal, some not so much—as she struggles to right the wrongs of society. Only this time she’s not uncovering a murder. This time she’s covering one up.

Add to that her new occupation of keeping a startup PI venture—the indomitable mystery-solving team of Amber Kowalski and Quentin Rutherford—out of trouble and dealing with the Vatican’s inquiries into her beloved daughter, and Charley is on the brink of throwing in the towel and becoming a professional shopper. Or possibly a live mannequin. But when someone starts attacking humans who are sensitive to the supernatural world, Charley knows it’s time to let loose her razor sharp claws. Then again, her number one suspect is the dark entity she’s loved for centuries. So the question becomes, can she tame the unruly beast before it destroys everything she’s worked so hard to protect?

Review:
After the ending of the previous book I couldn't wait to dive into Twelfth Grave and this was another action packed instalment in the series. Reyes may have escaped from the hell dimension BUT while he was there he regained all his godly memories and now it looks like the Reyes Charlie knows and loves has left the building. In his place is Rey’azikeen, the malevolent god with the power to destroy the world if Charley doesn't manage to get through to him.

This story sees Charley focused on trying to find Rey’azikeen and show him that he doesn't have to be evil. She also has a supernatural serial killer to deal with, one that was also set loose when Reyes escaped from the god glass dimension, and who is currently targeting people who have any kind of ability to see beyond the human plane. As if that wasn't enough she's Amber and Quentin have also decided to open their own private detective agency so Charley and Cookie are mentoring them as they try to solve their first case.

I loved this book, it has all the usual mayhem and madcap antics from Charley and her friends and Reyes is delicious even when he's veering towards the dark side. I think what I loved most was how strong Charley's faith in Reyes is, she knows that despite all the horrendous things he has been through there is good inside him and she's determined to find a way to bring back the man she loves. She won't accept any other option and she refuses to let anyone else sway her mind on that.

This book does end on a killer cliffhanger though, seriously if you thought the last book was bad you haven't seen anything yet! If I'd read this book when it was first published I would be pulling my hair out waiting for the next instalment but luckily Thirteenth Grave is already available and I've already been able to start reading. It isn't often that I binge read a series quite as fast as I have this one and I'm actually pretty sad that it's about to come to an end.