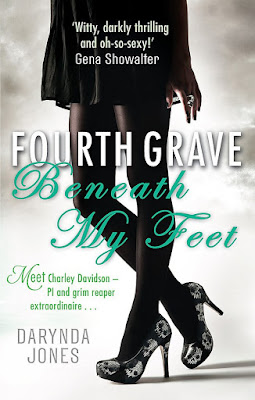 Welcome to the world of grim reaper extraordinaire Charley Davidson. Try as she might, there’s no avoiding her destiny.

Sometimes being the grim reaper really is, well, grim. And since Charley's last case went so awry, she has taken a couple of months off to wallow in the wonders of self-pity. But when a woman shows up on her doorstep, convinced someone is trying to kill her, Charley has to pull herself together.

In the meantime, the sexy, sultry son of Satan, Reyes Farrow, is out of prison and out of Charley's life, as per her wishes and several perfectly timed death threats. But his absence has put a serious crimp in her sex life. While there are other things to consider, like the fact that the city of Albuquerque has been taken hostage by an arsonist, Charley is having a difficult time staying away. Especially when it looks like Reyes may be involved.

Just when life was returning to normal, Charley is thrust back into the world of crime, punishment and the devil in blue jeans in this hilarious fourth instalment in the New York Times bestselling series.

Review:
We get to see a very different side to Charley in this book, it's been several months since she was tortured so physically she's fully recovered but emotionally not so much. She's avoiding all her friends and family, hasn't left her apartment in weeks and has a scary new addiction to the shopping channels that has wiped out pretty much all of her savings. Cookie and Gemma have both been doing their best to get through to her but she has a long way to go before she's back to her normal self.

She's not really interested in taking any PI work but a girl can't eat if she doesn't pay the bills so it's time to accept a new job. Her latest case involves a woman who is convinced someone is trying to kill her and is desperate for help and tracking down a would be murderer might just be enough to pull Charley out of the hole she's fallen into.

I've always liked Charley, I appreciate that she's usually so willing to put herself in danger to protect the people she cares about and I'm enjoying learning about her grim reaper abilities but it was really interesting to see a more vulnerable side to her in this book. She's had to deal with so much recently that it was bound to take a toll on her and it was hard to see her feeling so lost and alone. She has a great support system thanks to her best friend Cookie and I'm glad that she's starting to build a relationship with her sister now too. I'm still not happy with her dad though, he's done so much to hurt her that he's got a lot of making up to do before I'll forgive him.

Reyes is out of prison but he's keeping his distance and isn't exactly on speaking terms with Charley. Things are really complicated between them and we're only starting to uncover some of his secrets but I can't wait to dig a little deeper. He does do some very questionable things but he seems to have Charley's best interests at heart and he is doing his best to protect her. I love the interactions we get between the two of them and that we start seeing some depth to their relationship here, the attraction has been there from the beginning but Reyes has been hiding so much for such a long time that it's about time he started opening up a bit.

I'm really enjoying this series and looking forward to seeing what happens next.