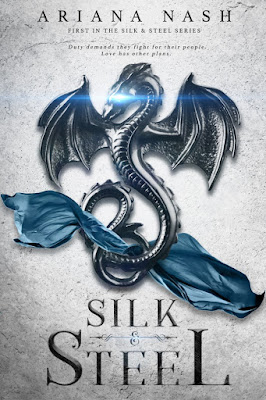 A tormented dragon prince.
A captured elven assassin.
Duty demands they fight for their people but love has other plans.

Eroan, one of the last elven assassins, lives for one purpose: kill the queen.

He would have succeeded if not for her last line of defense: Prince Lysander. Now, captured and forced into the queen’s harem, Eroan sees another opportunity. Why kill just the queen when he can kill them all? It would be simple, if not for the troubled and alluring dragon prince. A warrior, a killer, and something else… something Eroan finds himself inexplicably drawn to.

Trapped in a life he despises, Lysander knows his time is running out.

If the queen doesn’t kill him for his failures, her enemies will. There’s nothing left to live for, until an elf assassin almost kills him. A stubborn, prideful, fool of an elf who doesn’t know when to quit. An elf who sparks a violent, forbidden desire in Lysander. If Lysander can’t save himself, maybe he can save the elf and maybe, just maybe… one stubborn elf will be enough to bring down the queen before her reign brings death to them all.

This series is a dark fantasy intended for mature readers.
Silk & Steel features gay and bisexual characters and encounters.

Review:
I'm a huge fan of Pippa DaCosta's writing so when I found out she was writing a dark fantasy M/M story under the pen name of Ariana Nash I immediately added it to my wish list. Throw in the fact that the main characters of Silk & Steel are an elven assassin and a dragon prince and I just couldn't wait to get started! Anyone who has ever read any of Pippa's stories will know that she excels at detailed world building and tortured heroes and she has outdone herself on both of those fronts with this book.

Eroan is one of the few surviving members of the elven assassins, his whole life has been spent training to kill the dragon queen although he has always known that he is more likely to die in the attempt than to actually succeed. He came so close to achieving his goal but he was captured by the dragon prince Lysander and now he is being held prisoner in their stronghold. The only thing keeping Eroan going is his dream of ending the dragon queen once and for all but the longer he spends in captivity being tortured the slimmer his chances appear.

Lysander has been his mother's plaything since he was a child, nothing he ever did was good enough to earn her acceptance and the title prince is a mockery when he is just as much a prisoner of his circumstances as Eroan. Lysander has given up hope of surviving his mother but there is something about the fierce and proud elf that makes him long for a future he knows is impossible. Perhaps if he can just manage to save Eroan then his entire life won't have been wasted but to do that he's going to have to stand up to the woman who has made his entire life a misery.

You only need to read the blurb for Silk & Steel and the warnings it contains to know that this story is going to be a dark one, it's actually quite uncomfortable to read at times but in that best kind of ways where your heart hurts but you just can't stop reading. The characters are complex with believable motives and although there is a great forbidden romance bubbling along in the background it's definitely  a slow build which works perfectly in this situation. That's not to say there's no heat in this story because there's still plenty of sex happening, both of the M/M and M/F variety, but Eroan and Lysander have a long road to travel if they want any chance at a happily ever after and they're nowhere near the finish line yet.

I'm ridiculously excited to see where this series is going to take us, there have already been plenty of unexpected developments and I'm sure Ariana Nash is going to throw in a few more curveballs along the way. This is shaping up to be one heck of a ride!