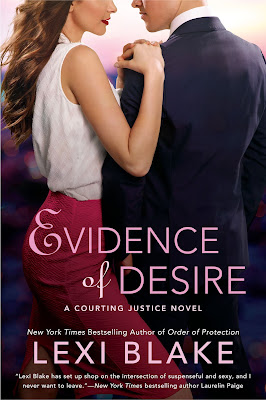 A fast-paced contemporary romance that sizzles from the New York Times bestselling author of Order of Protection where passion for the aw isn't the only thing heating up the courtroom.

Isla Shayne knows she's in over her head. As former all-star linebacker Trey Adams's personal lawyer, she's used to handling his business dealings and private financial matters, not murder charges. She needs to find an experienced criminal attorney who speaks her client's language. David Cormack of Garrison, Cormack and Lawless is exactly what she needs in the courtroom—and the only man she wants in the bedroom.

For David, taking on the Adams case means diving back into a world he thought he'd left behind and colliding head on with tragic possibilities he's in no mood to face. There's a reason professional football is in his past and no matter how close Isla gets to the truth he intends to leave it there.

But long days working on the case together lead to hot nights in each other's arms. As their feelings grow, the case takes a deadly twist that could change the game between the two lovers forever.

Review:
Isla Shayne is the family lawyer for retired linebacker Trey Adams and his family, she's used to helping them with business deals or purchasing property but when Trey is accused of murdering his wife she is in completely over her head. She knows Trey is innocent but with the evidence stacking up against him she needs help and there is no criminal attorney she can trust more than David Cormack. As an ex player himself David has a unique perspective on the health issues that Trey is battling and he will do whatever it takes to get his client the help he needs but unless they can figure out who the real murderer is Trey is looking at a life behind bars.

Evidence of Desire is the second story in Lexi Blake's Courting Justice series and I enjoyed it even more than the first book. The chemistry between Isla and David was great from the very beginning and I liked how open they were about the attraction they felt. There are no rules against them dating so they fall into a relationship very quickly but although they have very strong feelings for each other David has a reason to keep Isla at a distance. I have to admit the relationship did move very quickly, I would have preferred a slightly slower build up, but I liked them as a couple and thought they suited each other.

As far as the murder mystery went I had a very good idea who my main suspect was from very early on but I was wrong about their accomplice and hadn't guessed the whole story so the book did manage to surprise me. I also found it really interesting learning more about Trey's traumatic brain injury and how it affected his personality, it made life so difficult for his whole family but I loved the way his wife stood by him and how strong they were as a couple. That made it all the more heartbreaking that their story ended in tragedy though. I also liked that we got to catch up with the previous couple Win and Henry and I have a feeling I'm going to love Noah's story which I'm guessing will be up next.