Review: Beneath the Citadel - Destiny Soria 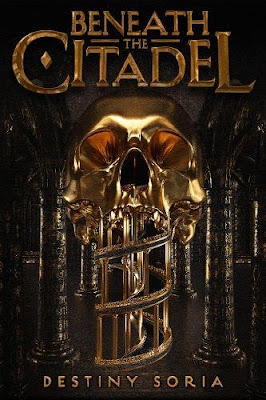 In the city of Eldra, people are ruled by ancient prophecies. For centuries, the high council has stayed in power by virtue of the prophecies of the elder seers. After the last infallible prophecy came to pass, growing unrest led to murders and an eventual rebellion that raged for more than a decade.

In the present day, Cassa, the orphaned daughter of rebels, is determined to fight back against the high council, which governs Eldra from behind the walls of the citadel. Her only allies are no-nonsense Alys, easygoing Evander, and perpetually underestimated Newt, and Cassa struggles to come to terms with the legacy of rebellion her dead parents have left her — and the fear that she may be inadequate to shoulder the burden. But by the time Cassa and her friends uncover the mystery of the final infallible prophecy, it may be too late to save the city — or themselves.

Review:
It's rare to find a stand alone fantasy in YA these days so Beneath the Citadel makes a refreshing change. As much as I love a good series it's just so nice to pick up a book and know that you're going to get a full story with no irritating cliffhanger. What you're also going to get is a story full of diverse characters, a good amount of action (it opens with the main characters imprisoned and sentenced to death!), and a really sweet slow build romance.

This is the story of five teenagers who are working together to continue a rebellion against the city council that has subjugated their people for years. This is a world where the rich hog the resources while the poor suffer daily and they use prophecies to justify their actions. Cassa is the leader of the group, her parents were rebels who died for the cause and she is determined to live up to their legacy. Then you have her ex boyfriend Evander, who has a magical talent for manipulating silver, and his sister Alys who is a diviner who can see glimpses of the future. The final member of the group (and probably my favourite) is Newt, a contortionist and escape artist who is just looking for acceptance after being raised by an abusive father. There is also Vesper, someone who used to be Cassa's best friend but who betrayed them and is the reason they were captured in the first place.

The story is told from multiple points of view but I had no problem keeping their identities separate and enjoyed getting the chance to get to know all of the characters a bit better. The world building was good but there was a lot to learn about which did slow down the pace of the story a little in the middle but, after the explosive start, and in the build up to an action packed ending, I didn't mind the slower middle. There were plenty of twists and turns along the way to keep things interesting and the story was enjoyable throughout. I'll definitely be watching out for more from Destiny Soria in the future.