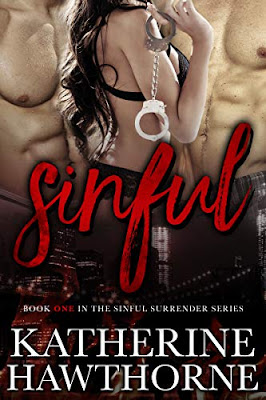 Xander was a dream that would never be.

One catastrophic night left me orphaned at the age of seventeen. Hunted by a murderer, Xander saved me from the pits of hell, braving a fire that would have ended my life. Hiding me from a killer, he became my protector, my best friend, but never anything more.

Sin was a nightmare waiting to happen.

Six years later, a friend is murdered at the hottest nightclub in Manhattan, again thrusting me into a killer’s crosshairs. Now a detective with the NYPD, I refuse to hide, unyielding in my pursuit of justice, which has eluded me for so long. Determined to keep me safe, Sin forces me from the case. Defying him at every turn, our contentious relationship finally explodes in the most scandalous way conceivable, leaving me devastated.

I wanted them both.

Xander, sophisticated and elegant. My hero, the man who owns my heart. Sin, dominating alpha-male. My lieutenant, forbidden in so many ways. One dangerous kiss changes everything, catapulting me into a war between the two, neither of them willing to let me go. I become a pawn in their game until they join forces in a way I never saw coming. But lies and deception threaten to destroy us, leading to a betrayal that cuts so deep, I wonder if I’ll ever survive.

AUTHOR'S NOTE: This book is intended for mature audiences due to explicit language and sexual content. Sinful is a menage romance that's all about the girl. There are NO M/M scenes.

Review:
I'm torn when it comes to this book, yes that cliffhanger ending did make me really want to know what happens next but at the same time I don't really care much about any of the main characters and I had a lot of issues about the way their relationships are being handled so far.

Belle went through a traumatic experience as a teenager when her father brutally murdered her mother and then killed himself, she found their bodies and is still dealing with that emotionally. She never believed her father was the killer and she's now become a detective, assumably in the hope of investigating her parent's deaths. The two love interests are Xander, who has been a friend and protector since her parents died and Sin (aka Alex), the police lieutenant who trained her and who is still her boss.

The two men are best friends, are both aware of the other's interest in Belle and seem to have come to some arrangement between them years ago that neither will take that any further. Yet now they're both making moves at the same time, are aware the other is making moves too and don't seem to have any issue with that (this attitude and the cover lead me to believe there are threesome potentials from this series) until right near the end when they get all alpha male and possessive and pretty much want to fight each other for her. It all just seemed so stupid, especially when you realise they've both been perving over her since she was only 17 (they're both at least 10 years older) and just waiting for her to be old enough to be ready for them.

Belle herself is full of contradictions, she's ridiculously naive in some ways yet we're supposed to believe she's a fully fledged detective at just 26. It's hard to believe she could find her way out of a paper bag, let alone make detective at such a young age. There were plot holes and contradictions in the storyline which didn't help but my biggest issue was a spanking scene that was completely lacking in consent. I will NEVER understand why author's think it is sexy for a hero to spank a girl for "breaking the rules" when she isn't in a relationship with him and never agreed to any rules in the first place! I'm more than happy to read a spanking scene in a BDSM story where everyone has agreed the rules and knows exactly what they're getting into but that couldn't be further from what happened in this book.

I already have a copy of the second book in the series so I'll probably give it a try just to see how things turn out after that cliffhanger but the author is going to have some serious work to do to get me on board with Belle ending up with either of these men, let alone both of them!