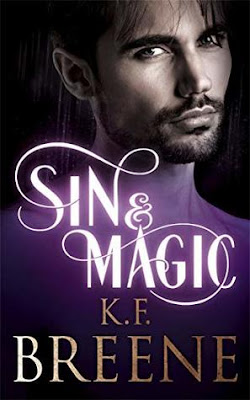 I've agreed to work for a Demigod. My job? Find the spirit of his mother and release her before his vengeful father finds out and kills us all.

Have I lost my mind?

Thankfully, I don't have to do it alone. Kieran has brought in help: a Necromancer who loves to flirt with danger. Bria can help me find the clues to free Kieran's mom.

She can also help me learn my potent and extremely terrifying magic.

But as we work deeper into magical San Francisco, we uncover a minefield waiting to explode. I'm learning that there are far worse things than death.

Review:
Having agreed to work with demigod Kieran Alexis knows her life will never be the same. She can't turn her back on the ghosts that his father has trapped but she worries about putting her two adopted children at risk so her decision is weighing heavily on her. Kieran has vowed to keep her safe and he's followed through on his promises to help Alexis' family and to provide protection for them all but deep down he knows that if his father discovers what they're up to then Kieran might not be powerful enough to save them all.

After loving the first book in this series I was really excited to get my hands on a copy of Sin & Magic and I'm happy to say that the series is just getting better and better. Alexis has spent so much time hiding her magical abilities that she has never really bothered to test out her magic and has no idea what she's really capable of so it was really interesting to see her start to push her boundaries. She is obviously far more powerful than she ever realised but it's a fine line between learning to use her powers and using them so much that she draws unwanted attention to herself so she's got to be really careful testing the waters.

I think one of the things I love the most about these books is the bond between Alexis and the two teenagers she basically adopted. There is a lot of love between Alexis, Daisy and Mordecai so while they may rub each other up the wrong way occasionally they always 100% have each other's backs. It's interesting to see how Kieran's Six (the men he trusts the most and has a strong bond with) all interact with Alexis and the kids, they seem to really appreciate the little family and make excuses to spend time with them and I enjoyed the interaction between them all.

Of course I also love the developing romance between Alexis and Kieran too, there has been an intense attraction between them since they first met but Alexis is wary so this side of the story hasn't been rushed at all which I appreciate. Kieran is quite surprised by the way he reacts to Alexis and it scares him that he doesn't think he can keep her safe but he's slowly starting to realise that she is powerful in her own right and perhaps working together they could be unstoppable.

I'm already looking forward to the next book in the series, I can't wait to see how Kieran's father reacts when he finds out what they've been up to but I have a feeling they're going to be in a whole heap of trouble when he does!