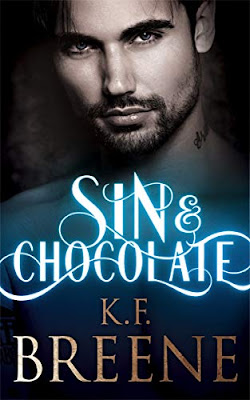 Some people are ordained for greatness…

Those people usually have a lot of drama in their life. Drama I happily do without. I live in a forgotten corner of nowhere for a reason: there is safety in anonymity. I have enough problems just trying to get by.

But when Kieran, a sinfully sexy demigod at the pinnacle of power, crashes into my life, suddenly my whole world is turned upside down.

He’s harboring a deadly secret, one that could destroy all he holds dear. He thinks I’m the key to his salvation, and he wants me to help him claim vengeance.

He also wants me with a passion that burns my body from the inside out.

To ignore him is impossible, but to give in to my desires, even for a night, would thrust me into danger I might not survive.

Can I resist the temptation?

Review:
In a world that's split between people who have magic and those that don't there is a lot of distrust between the two groups and those who fall between the cracks struggle to survive. Alexis has magic but her ability to see and talk to ghosts isn't really a money maker so she works whatever odd job she can find to make ends meet. It doesn't help that she has two teenage wards to take care of, Mordecai, who is a shapeshifter with a serious illness, and Daisy, a young non magical girl who ran away from an abusive foster home. Life is difficult for the three of them, they're constantly struggling to get enough money for food and Mordecai's medication but they have a strong bond with each other and all appreciate their little family.

Alexis is more than happy to live out of the spotlight and she does her best to avoid those with a lot of magic but her world is turned upside down when demigod Kieran crashes into it. Kieran needs Alexis' help to rescue his mother and he's not taking no for an answer, no matter how determined Alexis is to walk away from him.

Sin & Chocolate was a brilliant start to K.F. Breene's new paranormal romance series, I loved the introduction to this world and the different types of magical abilities people have. It's always interesting to see worlds where those with magic are out in the open and the way that affects their interactions with normal humans and this world felt very believable in the way the two different groups were often prejudiced against each other. There was a lot of humour in the story which made it a delight to read and I absolutely loved Alexis' little family group. Alexis, Mordecai and Daisy are all dysfunctional in their own different ways but they have chosen each other as family so no matter how much they bicker amongst themselves they will fight fiercely against the rest of the world.

Kieran was incredibly intriguing and I'm really looking forward to getting to know him and the six members of his guard better, we see some chapters from his point of view which was great to give us the chance to see what he's thinking and feeling but I was glad he's still quite mysterious so we have more secrets to discover as the series continues. Kieran was definitely an alpha male and his behaviour towards Alexis could be quite stalkerish at times but I liked the way she stood up to him and how she never let him take an inch. The banter between them was great and you can already see the chemistry there even though they haven't acted on it yet.

I'm really excited to see where this series goes next. It's going to be fun to see how Alexis copes with the changes in her life since she's started learning more about herself and her own background and I'm definitely looking forward to spending more time with her, Kieran and the others.