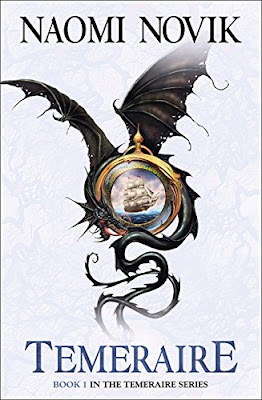 Naomi Novik’s stunning series of novels follow the global adventures of Captain William Laurence and his fighting dragon Temeraire as they are thrown together to fight for Britain during the turbulent time of the Napoleonic Wars.

Captain Will Laurence has been at sea since he was just twelve years old; finding a warmer berth in Nelson's navy than any he enjoyed as the youngest, least important son of Lord Allendale. Rising on merit to captain his own vessel, Laurence has earned himself a beautiful fiancée, society's esteem and a golden future. But the war is not going well. It seems Britain can only wait as Napoleon plans to overrun her shores.

After a skirmish with a French ship, Laurence finds himself in charge of a rare cargo: a dragon egg bound for the Emperor himself. Dragons are much prized: properly trained, they can mount a fearsome attack from the skies. One of Laurence's men must take the beast in hand and join the aviators' cause, thus relinquishing all hope of a normal life.

But when the newly-hatched dragon ignores the young midshipman Laurence chose as its keeper and decides to imprint itself on the horrified captain instead, Laurence's world falls apart. Gone is his golden future: gone his social standing, and soon his beautiful fiancée, as he is consigned to be the constant companion and trainer of the fighting dragon Temeraire...

Review:
Temeraire (published with the title His Majesty's Dragon in the US) is the first book in Naomi Novik's alternate history series set during the Napoleonic Wars but with the addition of dragons and an Aerial Corps to the fighting forces.

Laurence was a Navy Captain who expected to come home a hero after capturing a French ship containing a rare dragon egg, after all the eggs are precious and hard to come by and the Aerial Corps are always trying to get more of them, but things got slightly problematic when they realised that the dragon would hatch before they could get it safely back to dry land. You see, dragons create a special bond with someone from the moment they are born and once that bond has been made it is very hard to break it. Nobody on Laurence's ship wanted to take on that bond and be forced to leave the Navy to instead join the less well thought of Aerial Corps. Laurence would never have chosen to bond himself to newly hatched dragon Temeraire but thats exactly the situation he finds himself in and now his life will never be the same again.

I enjoyed this book so much, the pace is actually pretty slow in places but that's because this is all about setting up the world, introducing the main players and watching Laurence and Temeraire bond and train together. There are some great battles at sea both at the beginning and end of the book and I loved the aerial fights between the dragons too. What I loved most was Temeraire and the other dragons though, the fact that they can talk was wonderful and the conversations between Temeraire and Laurence always left me smiling. Laurence may not have chosen his new life but he accepts his responsibility towards Temeraire and does everything he can to keep his dragon happy and healthy. I loved the way that older, bigger dragons are basically like airships that have whole crews on board when they go into battle. I enjoyed the dragon hierarchy and the competition between the humans too.

This is nothing like Uprooted or Spinning Silver but I can already tell I'm going to love this series so I can't wait to start reading the next one.