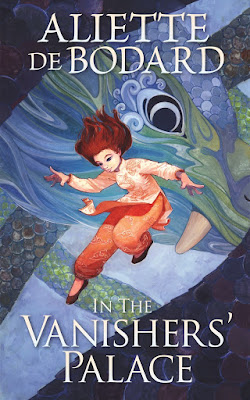 From the award-winning author of the Dominion of the Fallen series comes a dark retelling of Beauty and the Beast.

In a ruined, devastated world, where the earth is poisoned and beings of nightmares roam the land...

A woman, betrayed, terrified, sold into indenture to pay her village's debts and struggling to survive in a spirit world.

A dragon, among the last of her kind, cold and aloof but desperately trying to make a difference.

When failed scholar Yên is sold to Vu Côn, one of the last dragons walking the earth, she expects to be tortured or killed for Vu Côn's amusement.

But Vu Côn, it turns out, has a use for Yên: she needs a scholar to tutor her two unruly children. She takes Yên back to her home, a vast, vertiginous palace-prison where every door can lead to death. Vu Côn seems stern and unbending, but as the days pass Yên comes to see her kinder and caring side. She finds herself dangerously attracted to the dragon who is her master and jailer. In the end, Yên will have to decide where her own happiness lies—and whether it will survive the revelation of Vu Côn’s dark, unspeakable secrets...

Review:
In the Vanishers' Palace is the third Beauty and the Beast retelling I've read recently (I can't help it, it's my favourite fairytale so I can never resist retellings!) and I think it was the most unique of the three. Aliette de Bodard has created a really interesting world based on Vietnamese mythology which I just wanted to spend more time exploring. I could happily read book after book set in this world learning more about the Vanishers who devastated the earth before disappearing and leaving humanity behind trying to pick up the pieces.

This is an f/f retelling where the beast is actually a shapeshifting dragon, with a full asian cast and plenty of diversity which is another huge plus for me. I loved that there were a couple of gender neutral characters and nobody seemed to bat an eyelid at same sex relationships, that was all just a normal and accepted part of the world just like it should be.

Yên's mother is a healer and Yên has always been her apprentice and a scholar but their family is very low in the hierarchy of their village and the Elders have very little use for Yên so when they need to give a sacrifice to the dragon Yên is the one who is chosen to be sent away. Yên knows she's been given a death sentence, everyone knows the dragon is a murderer, but she knows she'll never be accepted in another village and it's too dangerous to be wandering around unprotected so she has no choice, especially when the Elders threaten her mother if she doesn't go along with them.

Vu Côn may be a dragon but she is nothing like what Yên is expecting, instead she finds that Vu Côn is a compassionate healer who would do anything to protect her children. Yên is given the task of teaching the twins, Liên and Thông, and quickly starts to settle into life in the palace. What she doesn't realise is that Vu Côn is keeping a major secret, one that Yên will find very difficult to forgive.

I've already mentioned how much I enjoyed the world Aliette de Bodard has created and I can't say enough how much I want to spend more time exploring it. I did feel that the romance between Yên and Vu Côn felt a little rushed to me and unfortunately the sex scene was more of a turn off than a turn on thanks to the way Vu Côn's human form was described. Every time Yên mentions touching Vu Côn she uses words like cold and slimy, even when the dragon is in human form and to be honest I was a bit creeped out when she started changing back into her dragon form while they were in the middle of having sex. I just don't think snouts and slimy tails have any place in the bedroom!

This was the first story I've read by Aliette de Bodard and even though there were parts of it that didn't work quite so well for me I'm definitely interested in trying more of her books, she has a really lovely writing style and her world building was very creative so I'm looking forward to seeing what else she can come up with.