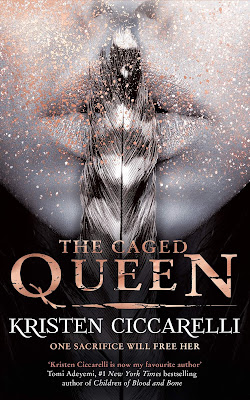 What would you sacrifice for love?

Roa and her sister, Essie, were born with a bond so strong that it forged them together forever. It was a magic they cherished - until the terrible day Essie died and her soul was trapped in this world.

Dax, the heir to the throne of Firgaard, was responsible. Roa swore she would never forgive him - yet when he came begging for her help to dethrone his cruel father, Roa made him a deal. She'd give him the army he needed if he made her queen.

Now she is royalty, but an outlander; far from home and married to her enemy. And even after everything she has sacrificed, Dax's promises have gone unfulfilled. Roa's people still suffer.

Then a chance to right every wrong arises - an opportunity for Roa to rid herself of this enemy king and rescue her beloved sister. During the Relinquishing, when the spirits of the dead are said to return, Roa can reclaim her sister's soul for good.

Review:
The Caged Queen is the second book in Kristen Ciccarelli's Iskari series and picks up the story a few months after the end of The Last Namsara but this story is told from Roa's point of view rather than Asha's. You'll probably remember that Roa is the outlander who married Dax and it was her people who helped him and Asha overthrow their father so Dax could become the new king. Now Asha is living in exile while Roa tries to make sure Dax follows through on his promises to make life better for the outlanders. They have suffered under his father's reign and she wants him to make things right and give them all the chance to thrive instead of continuing to struggle just to survive.

Roa and Dax were unlikely allies from the start, especially when you realise that Dax was to blame for the death of Roa's twin sister Essie. Roa and Essie were inseparable as children and the bond between them was so strong that even after Essie's death her spirit remained in this world to stay by Roa's side. Now Roa is struggling to make the people of Firgaard accept an outlander queen, she's fighting with Dax because the promises he made to her still haven't been fulfilled and Essie's spirit seems to be fading away. When Roa is offered the opportunity to solve all her problems in one fell swoop, even rescuing her sister and giving her the future she deserved, Roa has to make some very difficult decisions.

I loved getting the chance to dive back into this world and really enjoyed the chance to get to know Roa a bit better. As with the previous book most chapters open with a story from this world or a glimpse into Roa, Essie and Dax's past, their relationship is a lot more complicated than I first realised because they all knew each other as children and I really enjoyed seeing their past unfold alongside events in the present. Roa chose to marry Dax because she believed it was the best thing for her people but now he's king he doesn't seem to be following through on his promises so she is really struggling to deal with the sense of betrayal. There is a lot of bad blood between them and a deep lack of trust so their relationship was rocky from the beginning and only gets worse as time goes on.

I felt really sorry for Roa because she was pretty alone most of the time, she didn't really have anyone to turn to and she desperately needed someone to be on her side. I was really annoyed at the way Dax was behaving too, I'd grown to like his character a lot in the first book so I was really surprised by how badly he was acting towards her but I could tell for a long time that everything wasn't what it seemed. I was totally caught up in the story and I did devour this book really quickly but I was a bit disappointed that the big misunderstanding between Roa and Dax went on for so long. I think for about 80% of the book we were led to believe something completely untrue and I was ridiculously relieved when they FINALLY had a proper conversation and started to let each other in on their secrets. The story could have been so much more satisfying if they'd done that a little sooner and then worked together to thwart their enemies!

I did love the way things were resolved though and I do find these books incredibly easy to get sucked into. I can't wait to see how the series ends in the next book and I'm really, really hoping that Dax and Asha's cousin Safire is going to be the narrator of the final story.

Source: Received from Gollancz in exchange for an honest review.


Don't forget to check out the rest of the stops on The Caged Queen blog tour: 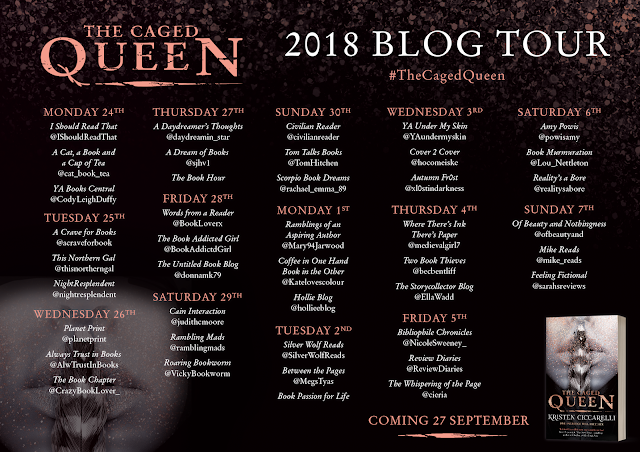