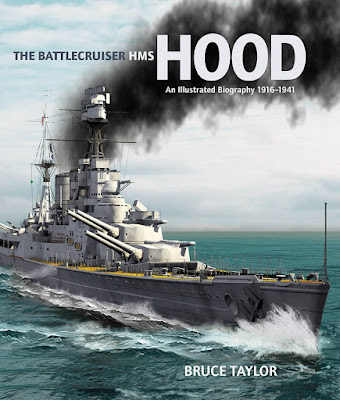 The battlecruiser HMS Hood is one of the great warships of history. Unmatched for beauty and charisma, unequalled for size, for 20 years the she was the glory ship of the Royal Navy, flying the flag across the world in the twilight years of the British Empire. Here, in words, photos and colour artwork, is the story of her life, her work and her people, from the laying of her keel on the Clyde in 1916 to her awful destruction at the hands of the Bismarck in 1941. Among the eyecatching strengths of the book is a unique gallery of photographs, including stills from a recently discovered piece of colour footage of the ship, plus a spectacular set of computer-generated images of both the exterior and interior by the worlds leading exponent of the art - a man who worked with the film director James Cameron (of Titanic fame). A wealth of new information on Hoods structure and operation make it essential reading for the enthusiast, modeller and historian alike. Hugely successful from its first publication, this is the forth printing of the ultimate book on the ultimate ship of the pre-war era, and is now presented in a new, smaller and affordable softback format.

Review:
I don't read a lot of non fiction but I've been doing some family history research recently and borrowed this book from my local library to help me. We know that one of my great uncles died at sea during WWII and family lore has always been that he died on board the HMS Hood so I wanted to do a bit more research about the ship and the tragedy that unfolded on the 24th of May 1941 when it sank during a battle with the German battleship Bismarck.

As it turns out we've managed to find evidence that although my great uncle served on the ship he was no longer on board when it sank, we're still trying to track down where he was transferred to and what ship he actually died on but it definitely wasn't the Hood. Apparently it's quite common for families to incorrectly believe relatives died on the Hood, probably because it was one of the most memorable ships at the time.

I'll admit that there are parts of the book that I skim read, some of it was a bit too technical for me since I have very little interest in actual ship building but this was still really interesting to flick though. It had a lot of information about the design, how the ship was built, the layout, life on board, ship pets, refits and previous accidents and how it was the pride of the British Navy. There are loads of pictures from throughout its career from when it's design began in 1916 right through to when it sank in 1941 including some large foldout illustrations.

1,415 men died when the Hood sank and there only 3 survivors rescued making it one of the worst tragedies in Naval history. Honestly I find it quite hard to wrap my head around that almost total loss of life.

If you're interested in finding out more you might want to check out the HMS Hood Association website where they have a full honour roll listing all the men who died on the ship along with lists of past crew members and loads of other information about the ship itself and the people who served on her including biographies for many crew members and details about the wreckage.

Source: Borrowed from the library