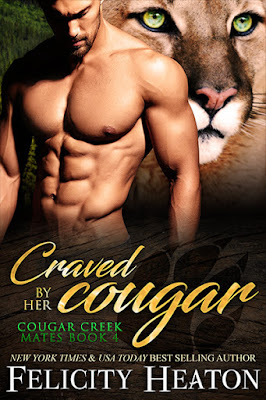 For the last twenty years, Cobalt has burned with a need of one female, a beautiful raven-haired cougar who captured his heart the moment he set eyes on her. His position as pride protector has been a blessing at past mating gatherings, keeping females away, but this time it feels like the worst of curses, because the female who has bewitched him so thoroughly is taking part for the first time and all he can do is watch as males battle for her.

As much as she hates the way her mother controls everything in her life, Ember is thankful for it as she constantly turns away suitors, unaware of the pain she’s sparing Ember from with every male she rejects. Every male who isn’t the gorgeous blond with darkness in his eyes and an easy smile she burns for with an intensity that scares her, awakens feelings in her that have her verging on doing something reckless. Damaged goods he might be, dangerous and unpredictable, but with every contest over her that pulls her closer to her doom, she grows more determined to follow her heart, no matter the consequences.

With every fight over the right to Ember, the tethers on Cobalt’s feelings twist and threaten to snap, a torment he cannot bear and one that has him willing to risk it all, because a single kiss would make even the harshest punishment worth it. He would die for one moment with her… his fated mate.

Review:
Cobalt has known that Ember is his fated mate for 20 years but he was waiting until she reached 100 before acting on his feelings. He thought he had plenty of time to talk her around but now her mother is determined to find a mate for her at the pride gathering and Cobalt's position as protector means he's not allowed to step forward and try to win her heart.

Ember has spent years following her mother's plans and allowing her to control her life, that's been great while her mother was turning away unwanted suitors but she's not so happy now that her mother has decided it's time for her to settle down. There is only one man Ember is interested in and he's taken great pains to keep his distance from her. Finally deciding to take her fate into her own plans Ember intends to go get her man but first she needs to break a few pride rules to claim him.

Craved by her Cougar is the fourth and final book in Felicity Heaton's Cougar Creek Mates series and I really enjoyed getting to know Cobalt better. Like his brothers he blames himself for not protecting the pride better the night that Archangel attacked and killed his parents and a lot of other pride members and he has been punishing himself for that ever since even though there was nothing more he could have done at the time. Now seeing all his brother's happily mated while he isn't even allowed to tell Ember how he feels is tearing him apart.

I have to admit I'm not a big fan of the way the cougar males battle it out to win a chance to woo the female pride members, especially when it seems like any male can step forward and try whether the woman is interested in them or not. I know she gets to say no to any winners but it seems so pointless letting them have all these battles when the woman isn't going to say yes to any of the men who are fighting so viciously! I was a bit worried that there was going to be a lot of that in this story but luckily the fights that do happen are mainly off page until towards the end of the book and there aren't as many as I expected. Ember knows she wants Cobalt and she's not interested in the battles either, she just wants to claim her man and have him claim her in return. This has been a fun series and I'm glad we've seen all of the brothers find happiness now.