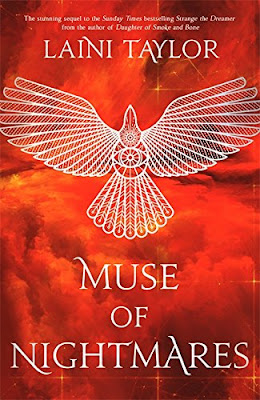 Sarai has lived and breathed nightmares since she was six years old.
She believed she knew every horror, and was beyond surprise.
She was wrong.

In the wake of tragedy, neither Lazlo nor Sarai are who they were before. One a god, the other a ghost, they struggle to grasp the new boundaries of their selves as dark-minded Minya holds them hostage, intent on vengeance against Weep.

Lazlo faces an unthinkable choice - save the woman he loves, or everyone else? - while Sarai feels more helpless than ever. But is she? Sometimes, only the direst need can teach us our own depths, and Sarai, the muse of nightmares, has not yet discovered what she's capable of.

As humans and godspawn reel in the aftermath of the citadel's near fall, a new foe shatters their fragile hopes, and the mysteries of the Mesarthim are resurrected: Where did the gods come from, and why? What was done with the thousands of children born in the citadel nursery? And most important of all, as forgotten doors are opened and new worlds revealed: must heroes always slay monsters, or is it possible to save them instead?

Love and hate, revenge and redemption, destruction and salvation all clash in this gorgeous sequel to the New York Times bestseller, Strange the Dreamer.

Review:
Strange the Dreamer was one of my favourite books of 2017 so it's no surprise that Muse of Nightmares has been at the top of my wish list ever since then. Sometimes having such high expectations of a story makes me nervous to actually start reading it but I never get that feeling of fear when I pick up a Laini Taylor novel because she has never disappointed me.

It's so hard to go into much detail about this book because really I think you're best going in blind and letting the story unfold as you read it. What I will say is that it took a completely different turn from the one I expected and yet somehow that still felt like exactly the right way for things to play out. This world is complex and the characters are so compelling that I really could have read it in one sitting if I wasn't so busy in the real world.

Strange the Dreamer was a book about good people who had done bad things, it was a story of regrets, hatred, the need for revenge and about two young people who were desperate to find a way forward that wouldn't end in all out war. Muse of Nightmares is about all of those things but also about hope, redemption and trying to right the wrongs you've done. It's about admitting your mistakes and understanding you could have done better but having to learn to find a way forward in spite of the pain you've both suffered and caused other people. You have to learn to forgive yourself and the enemies that can no longer hurt you if you want to build a future that isn't full of the same fear and destruction.

Honestly it's so hard to write reviews for books that are as special as this one. I don't have the words to adequately express how much I love this series or how happy this book made me. Laini Taylor's writing is nothing short of magical, I can't think of any other author who writes quite as beautifully as she does and her world building always blows my mind. But most of all it's her characters that I love, they're so multilayered and compelling that they feel like real people and even the ones you hate have redeeming qualities that make you want to see them turn their lives around.

Muse of Nightmares was the perfect follow up to Strange the Dreamer and this is now my all time favourite duology. Everything about it is perfect, I love the world, the action had me on the edge of my seat and the romance melted my heart. There were even a couple of Easter eggs for fans of the Daughter of Smoke and Bone series and although you don't need to read those books to enjoy this one I would definitely recommend them all. I can't wait to see what Laini Taylor comes up with next, her books will always be auto-buys for me & my only wish is that she doesn't keep us waiting too long for the next adventure!