Review: Beast: A Tale of Love and Revenge - Lisa Jensen 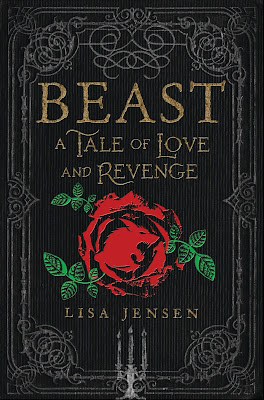 Filled with magic and fierce emotion, Lisa Jensen's multilayered novel will make you question all you think you know about beauty, beastliness, and happily ever after.

They say Château Beaumont is cursed. But servant-girl Lucie can’t believe such foolishness about handsome Jean-Loup Christian Henri LeNoir, Chevalier de Beaumont, master of the estate. But when the chevalier's cruelty is revealed, Lucie vows to see him suffer. A wisewoman grants her wish, with a spell that transforms Jean-Loup into monstrous-looking Beast, reflecting the monster he is inside. But Beast is nothing like the chevalier. Jean-Loup would never patiently tend his roses; Jean-Loup would never attempt poetry; Jean-Loup would never express remorse for the wrong done to Lucie. Gradually, Lucie realizes that Beast is an entirely different creature from the handsome chevalier, with a heart more human than Jean-Loup’s ever was. Lucie dares to hope that noble Beast has permanently replaced the cruel Jean-Loup — until an innocent beauty arrives at Beast’s château with the power to break the spell.

I love fairytale retellings and Beauty and the Beast is a particular favourite of mine so I was really excited for this book. Especially when I realised that Lisa Jensen was going to turn things around by making the beast the hero rather than the prince. I was really curious to see how that would work and had very high hopes for this story but unfortunately it didn't quite live up to expectations.

I think the first thing people need to know if they're thinking about reading this is that there is a fairly descriptive rape scene within the first few chapters, told from the point of view of the girl being raped so you're inside her head and feeling everything that happens right alongside her. I really wasn't expecting that (although perhaps that's my fault for not checking any reviews before I started reading) and I came pretty close to quitting the book on the spot. How was I ever supposed to think of Jean-Loup or the Beast as a hero after seeing him rape the narrator? I know the prince was a nasty piece of work in the original story and that this is all about redemption BUT there are things I don't think you can come back from and that made it very hard to continue the story.

I am glad I persevered though because I liked some of the things the author did with this story, I really liked the fact that Jean-Loup was portrayed as evil and stayed that way even after the beast had been "saved" and turned back into a human. Lisa Jensen didn't, in fact, try to redeem his character in any way shape or form and it was the Beast who was the hero from beginning to end. It was fairly easy to think of them as two separate people because Beast has no memories of his life as Jean-Loup and he acts totally different too. That was good because it meant I could like him but at the same time it was bad because you don't get the redemption arc that you do in the original story. Beast doesn't redeem himself because he doesn't remember the things he did wrong in the past and Jean-Loup remains evil until the end so I just didn't get the same kind of satisfaction from the story as I expected.

I thought it was interesting to tell the story from the point of view of maid Lucie rather than that of Beast or Rose (the Belle character) but I found it really hard to watch her fall for the man who raped her, even though she was falling for the Beast side not the human (I'm not even going to get into the magical explanation for why they are two completely different people because it didn't make a huge amount of sense to me!). I also found her story much more interesting when she was in her human form, once she was turned into a candlestick via magic there were sections where she spent literally days sat in a cupboard or on a windowsill just listening to what was happening around her which didn't make for a particularly interesting story.

I think for me the big sticking point was the rape though and I would probably have enjoyed the rest of the story a lot more if that hadn't happened. Jean-Loup could still have been a terrible person without having to go so far as raping Lucie and then I would have found it much easier to get on board with the later romantic feelings developing between Lucie and Beast. I think my rating would probably have been higher if that was the case.

Obviously this is my personal opinion so you may enjoy this more than I did but I definitely think this story should come with a trigger warning because it's never nice to be blindsided with an unexpected rape scene closely followed by a suicide attempt.