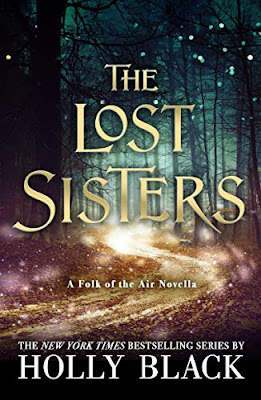 While Jude fought for power in the Court of Elfhame against the cruel Prince Cardan, her sister Taryn began to fall in love with the trickster, Locke.

Half-apology and half-explanation, it turns out that Taryn has some secrets of her own to reveal.

The Lost Sisters is a companion e-novella to the New York Times bestselling novel The Cruel Prince, by master writer Holly Black.

Folk of the Air Series:
The Cruel Prince
The Lost Sisters (Novella)
The Wicked King (2019)
The Queen of Nothing (2020)

Review:
The Lost Sisters is a novella follow up to The Cruel Prince and it contains MAJOR spoilers for that book so whatever you do DO NOT start the series here. The rest of this review will be written assuming people have already read The Cruel Prince so stop reading now if you haven't!

So this novella is basically a letter from Taryn to Jude where she tries to explain her actions and makes a very half-hearted attempt to apologise to her sister. I have to admit I was sceptical going into this because I really dislike Taryn after everything she did in the first book and I wasn't really expecting Holly Black to be able to change my mind about her.

While I found this story really interesting, particularly when we realise how badly Locke played both sisters off against each other, I still don't have a lot of respect for Taryn. In my opinion she's weak and even when she knew she was being manipulated and used against her sister she was willing to go along with it on the chance that she'd get what she wanted in the end. She was pretty happy to throw Jude under a bus for her own safety and happiness and I find it very difficult to like someone who will treat her twin sister so callously.

Taryn will never be my favourite person, and I'm still hoping that she'll end up regretting her choices as the series continues, but I enjoyed this novella and learning more about her motivations.