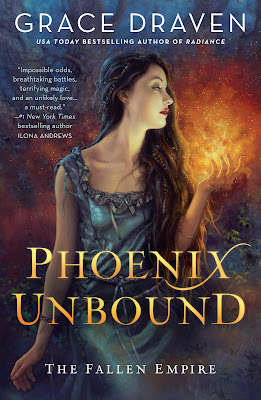 A woman with power over fire and illusion and an enslaved son of a chieftain battle a corrupt empire in this powerful and deeply emotional romantic fantasy from the USA Today bestselling author of Radiance.

Every year, each village is required to send a young woman to the Empire's capital--her fate to be burned alive for the entertainment of the masses. For the last five years, one small village's tithe has been the same woman. Gilene's sacrifice protects all the other young women of her village, and her secret to staying alive lies with the magic only she possesses.

But this year is different.

Azarion, the Empire's most famous gladiator, has somehow seen through her illusion--and is set on blackmailing Gilene into using her abilities to help him escape his life of slavery. And unknown to Gilene, he also wants to reclaim the birthright of his clan.

To protect her family and village, she will risk everything to return to the Empire--and burn once more.

Review:
Gilene's village is under the control of a brutal Empire and every year they are forced to send a young woman to the capital where she will be burned at the stake as entertainment for the elite. For the last five years Gilene has been the one to make that sacrifice thanks to her magical immunity to fire and the gift of illusions that allows her to escape from the flames without anyone noticing her. Gilene's magic costs her dearly but since anyone else sent in her place would die along with all the other tributes she feels duty bound to step up no matter how ungrateful the people she protects seem to be.

Azarion is a slave who was forced to fight in the arena as a gladiator, he has spent years battling to survive by becoming the most feared gladiator in the capital but he is still treated by a plaything to be used and abused by the empress. He is the only person who has seen through Gilene's illusions to understand that she returns to the capital every year and he has quickly realised that she could use her abilities to help him escape. If he has to blackmail her in order to get his freedom and return to his people then he's more than prepared to do it but Gilene is equally determined to return to her village so she can continue to protect the girls who would be send in her place but wouldn't survive the flames.

I have heard so many great things about Grace Draven's writing that I'm almost embarrassed to admit that I hadn't actually read any of her books before, I'm kicking myself even more for that now I've seen for myself how great she is! I absolutely loved Phoenix Unbound and I'm so excited to start working my way through her backlist while I wait for the next book in the Fallen Empires series to be released. This was absolutely spot on for a fantasy romance with wonderful world building, even better characters and a slow burn romance that was near perfection.

When Azarion blackmails Gilene into helping him escape she's livid but that is nothing compared to how angry she is when he then follows that up with kidnapping her because he needs her help to be accepted back by the rest of his people. Normally I wouldn't be on board with a romance that starts out with a kidnapping but Grace Draven has written this story so well that I was rooting for them well before Gilene started developing any kind of feelings. The relationship between them is incredibly well developed, it takes a long time for any kind of trust to form between them and Gilene fights Azarion all the way through when he does anything she doesn't agree with. She doesn't start developing romantic feelings until they've spent a lot of time together so she has seen how honourable he is and fully understands that he will follow through on his promise to get her home so I was never worried about Stockholm syndrome and was totally on board with the way she was feeling.

This world is utterly brutal and I'll warn you in advance that there is at least one rape scene and several more references to and threats of rape throughout the story, but never between the main characters so you don't need to worry on that front. It's also not only women who have that threat hanging over them and Azarion has suffered greatly at the hands of the empress too. Once they escape from the capital the danger comes in different forms as soldiers are sent out looking for the escaped gladiator. The two reluctant allies have to work together if they both want to survive long enough to make it back to their homes but even that may not be enough to help them escape from the long reach of the empire.

Phoenix Unbound was a fantastic start to this series and I can't wait to see where the story takes us next!