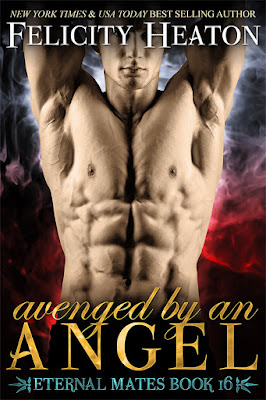 Duty should mean everything to the Fourth Commander of the Echelon angels. It did before he met her. Now, the only demon he wants to slay is the one that haunts the enchanting mortal huntress, and the temptation to hunt him in Hell, a realm that might kill him, is becoming impossible to resist.

Held captive by a dragon shifter in Hell, Emelia survived a torment that changed her in ways she hates. She wants her strength back. Her life back. To do that, she needs closure. To get that, she might have to trust not only a man again, but an immortal.

But when the price of vengeance is the soul of the angel bringing her back to life, will Emelia be willing to pay it?

Review:
Fans of the Eternal Mates series will already be familiar with Emelia, she was captured in battle in one of the first books and rescued from the dragon who has been tortured ever since in Taken by a Dragon. As a member of Archangel she's cropped up in other stories since then including Talon's story Turned by a Tiger. Now it's her time to find her own happily ever after in Avenged by an Angel. Emelia is matched with the Fourth Commander of the Echelon and their paths cross when he is sent to bring Sable to heaven to fight alongside the rest of the Echelon. Since she's mated to a demon king heaven is the last place Sable intends to go and Emelia helps her stay out of the Fourth Commander's reach.

I've been a fan of this series since the first book published back in 2013 and I always enjoy the romances that Felicity Heaton writes so it pains me to say that I struggled a bit with this one. I found the first half of the book was very slow going and it took me far longer to read than it should have because it just wasn't holding my interest. I liked the slow burn on the romance side but I think where this series is starting to fall down is on the overall story arc.

I like my paranormal romances best when there is some kind of ongoing plot in the outside world that is constantly changing from book to book and while the Eternal Mates series does kind of have something going on in the background it is taking far too long to actually go anywhere. The main issue is probably that we're 16 books in and yet we've been seeing the same period of time again and again and again. This starts not long after Emelia was rescued (which actually happened in book 7) and it covers several events we've already seen before in books since then like Talon going back into Archangel to rescue other captives (which happened in book 12!). Too much recapping and not enough forward motion made this story feel repetitive and a little boring.

I don't want to come across as too negative though because I have a lot of love for this world and for previous books in the series. Avenged by an Angel was enjoyable even though it didn't reach the heights I expect from this author, I liked both Emelia and the Fourth Commander's characters and the slow burn romance was a nice change since there are so many insta-love stories out there these days. The second half of the book was definitely far more action packed and the way it ended did give me hope that the overall story arc is going to start moving forwards soon so I'm hoping the next story won't have the same issues that I experienced with this one. It's still a series I'm happy to recommend and I'm looking forward to seeing where things are going from there but I definitely need things to keep moving so that the series doesn't start to stagnate.