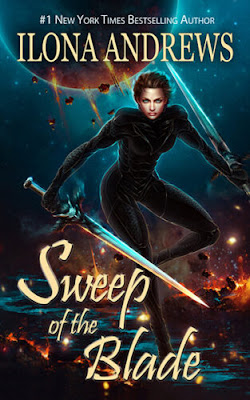 Maud Demille is a daughter of Innkeepers—a special group who provide ‘lodging’ to other-planetary visitors—so she knows that a simple life isn't in the cards. But even Maud could never have anticipated what Fate would throw at her.

Once a wife to a powerful vampire knight, Maud and her young daughter, Helen, were exiled with him for his treachery to the desolate, savage planet of Karhari. Karhari killed her husband, and Maud—completely abandoned by his family—has spent over a year avenging his debts. Rescued by her sister Dina, she's sworn off all things vampire.

Except... In helping Dina save the world, she met Arland, the Marshal of House Krahr, one of the most powerful vampire houses. One thing led to another and he asked for her hand in marriage. She declined. Arland is not used to hearing the word ‘no;’ and try as she might, Maud can't just walk away from Arland. It doesn't help that being human is a lot harder for Maud than being a vampire.

To sort it all out, she accepts his invitation to visit his home planet. House Krahr is extremely influential and Maud knows that a woman—a human, with a very questionable past—who's turned down a proposal from its most beloved son won't get a warm reception. Maybe she’s not sure about marrying Arland, but House Krahr isn’t going to decide for her. Maud Demille has never run from a fight, and House Krahr will soon discover that there's a lot more to Maud than they’re expecting.

Review:
As much as I love Dina and enjoy spending time at the Inn I'm really happy that we got a book about Maud and Arland. It was great to see more of the vampire culture and visit Arland's home planet but what I really enjoyed was seeing Maud find a place for herself with Arland's family - not just because Arland loves her but because they could see what an asset she is on her own merit!

Maud is very different to her sister, they both grew up in Inns so have a broad knowledge of the universe and all the different species that live in it, but Maud spent years living with vampires and in a lot of ways she's more vampire than human in her outlook on life. After everything that happened with Melizard she's wary of getting involved with Arland, she wants Helen to be happy and knows that she'd have a fuller life on Arland's home world, and more importantly than anything she loves Arland, but she's terrified of having her life ripped out from under her again. She wants to have her own place in society, one that doesn't depend on Arland where she's respected for her own abilities and she's determined to prove her worth to his family.

I loved how brave Maud is to fight for what she wanted and I really appreciated how patient Arland was, he never tried to push her further than she was willing to go and although he'd made up his mind about wanting to marry her he was happy to wait until she was ready for a relationship. I love the two of them together and when you throw adorable Helen into the mix they're just the cutest little family unit.

I've already read this story three times, first when it was being serialised on Ilona Andrews' blog, again when it had been finished so I could binge it in one sitting, and for the third time when the published version hit my kindle. I have to admit I was hoping we might have a little more heat added to the finished version but I just loved everything about this story. It's full of action, lots of humour, a sweet romance and a battle with space pirates. What more could I ask for? Oh and the ending left me desperate for the next instalment too. Interesting things are afoot in the Innkeeper universe and I can't wait to see what happens next!