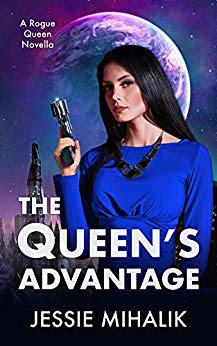 When Queen Samara Rani fulfills the promise she made to Emperor Valentin Kos to visit his court and meet with his advisors, she knows they won’t welcome her with open arms, especially when she’s been tasked with discovering the traitors within their ranks—traitors she tricked out of five million credits.

As soon as Samara begins her investigation it becomes clear that Valentin’s advisors want her gone and they aren’t picky about how. After their tactics turn violent, Samara and Valentin race to unravel the web of treachery and lies before the next attack ends in tragedy.

When the conflict escalates in ferocity and rumors start blaming Samara, she is forced to continue her hunt alone. Uncovering traitors is difficult when courtiers learn to lie before they learn to walk, and one misstep could cost her life. However, Rogue Queens aren’t easy to kill and Samara has more than a few tricks of her own.

Review:
I first read The Queen’s Advantage when it was available on Jessie Mihalik’s blog as a free online serial and I enjoyed it enough that I purchased the final, edited version when it went on sale. The story was officially edited and expanded upon before official publication and I enjoyed the story as much, if not more, the second time around.

Queen Samara Rami promised to help Emperor Valentin Kos figure out the traitors in his court who are trying to have him killed. To fulfil that promise she's travelled to his home planet and plans to spend at least two weeks living at the palace pushing buttons trying to get the traitors to betray themselves. It quickly becomes clear that someone doesn't want her there and that they're willing to use her, and the rest of her people, as scapegoats for the continuing attacks on Valentin.

I think this story had a little less action than the first book, there were still some great fight scenes but there was also a lot of political intrigue as Samara tried to figure out who was targeting Valentin. It was interesting to meet some of the people closest to him but I have to admit I missed Samara's loyal people who had remained behind to hold the Rogue Coalition together while she was gone. I'm still really enjoying the developing romance between Samara and Valentin, it's still very slow build (come on just give into temptation already!) but I think that works for them as a couple since they both have good reason to be wary of outsiders.

I'm looking forward to seeing what happens next when Jessie Mihalik starts posting book 3 on her blog.

Source: Originally read as an online serial on Jessie Mihalik's blog but I then purchased a copy once it had been edited and published