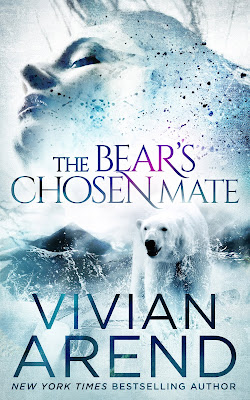 When the meddling, match-making family patriarch lays down the law, Giles Borealis’ three polar bear shifter grandsons agree to follow his edict. Only James, Alex and Cooper each have a vastly different plan in mind to deal with their impending mating fevers. Will any of them be able to fight fate?

First up: James, the youngest of the brothers….

He’s going to accept his fate—but only with the woman he chooses!

James Borealis figures if he has to get mated, it should be with someone he already knows and cares about—his best friend Kaylee. But when the mating fever hits, she’s still stuck in friendshipland while he’s ready to move all the way to true love and forever.

Kaylee has heard about polar bear mating fever, but while James has held the starring role in her fantasies for a long time, she’s not about to leap into a permanent relationship that’s all wrong for him. He’s the PR powerhouse for Borealis Gems while she’s a quiet bobcat shifter with massive family baggage. He loves the spotlight; she wants to hide in quiet corners.

But mating fever knows best, and when the storm settles, there’s no use in arguing with a polar bear’s choice.

Review:
I'm a huge fan of Vivian Arend's paranormal romances so I was really excited to find out she was starting a new trilogy about polar bear shifting brothers finding their mates. The Bear's Chosen Mate introduces us to the family and we see the patriarch encourage his grandsons to start seriously considering their futures and the possibility of starting families of their own.

James is the youngest brother but he has known who he would chose as his mate for years already so he's the one most open to the idea of settling down. Kaylee has been his best friend forever, she's a wildcat shifter not a polar bear but that doesn't bother James in the slightest. All he really cares about is that she's the perfect woman for him and if he's going to mate with anyone it has to be her. Kaylee has also been in love with James for years but she worries that they're too different and that she can't give him everything he needs in a partner. James is outgoing, the life and soul of the party and the face of the family's business while Kaylee is shy and quiet and hates nothing more than being in the spotlight.

I thought this was a great start to the series, I enjoyed meeting all of the brothers but the focus was definitely on James and Kaylee which is exactly as it should be in a romance. They were a really cute couple with great chemistry and I thought the mating fever was an interesting way of pushing them together. I thought Grandfather Giles was a bit mean with the way he tried to force the brother's into settling down but you could tell his heart was in the right place and I think he was making empty threats anyway. I did like that James and Kaylee both made him sweat a bit though, he deserved the little bit of revenge they took. I'm looking forward to getting to know the other brothers, Alex and Cooper, better. I have a feeling about who they'll both end up with but will have to wait and see if I'm correct, luckily I won't have to wait long as the rest of the series is publishing relatively soon.