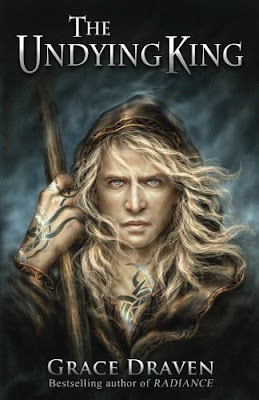 The stories are told in whispers, even after so long: of a man whose fair rule soured when he attained eternal youth. Imprisoned by a sorceress wife in a city out of time and place, he has passed into legend. Few believe in him, and fewer would set their hopes on his mercy. But Imogen has no choice. To break the curse that's isolated her since birth, she'll find the Undying King--and answer his secrets with her own...

^^Author Note: The Undying King is a stand-alone (not part of any series) novella of approximately 43,000 words and is also available in a duology titled FOR CROWN AND KINGDOM. This tale is intended for more mature audiences and contains graphic descriptions of physical intimacy.

Review:
The Undying King is part beauty and the beast retelling, part fantasy romance and it all adds up into a great read. Friends have been recommending Grace Draven's books for years but it was only after reading Phoenix Unbound that I realised how much I'd been missing out. Now after enjoying this book too I'm planning on working my way through the rest of her backlist as soon as I get a chance.

Imogen has spent her whole life living with a curse and unable to have skin to skin contact with anyone without causing their death. Her mother helped her live in isolation but on her deathbed she offered Imogen a glimmer of hope telling her that if she could track down the Undying King he would be able to cure her. The Undying King is living with a curse of his own though, he achieved eternal youth but ended up imprisoned alone in a lost city. Most people don't even believe the legends anymore but Imogen is desperate and she'll take any chance she can for the possibility of a normal life.

I really enjoyed this story and found it easy to root for Imogen and Cededa, I liked the hints of beauty and the beast but that it was still completely it's own story. The world building was good but I have to admit I wanted a little more of that side, this is a relatively short book and as a stand alone it didn't have a lot of time to delve into a detailed new world. I was also hoping for more at the end, it finished a little abruptly and left me wishing for a sequel. It was still a great story though and I have very high expectations for this author's other books.