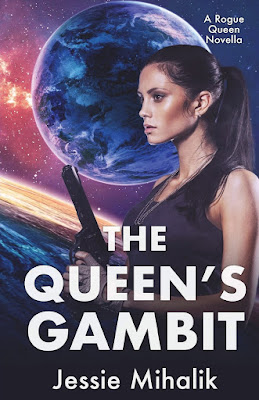 When the Quint Confederacy and the Kos Empire went to war—again—Queen Samara wisely kept her Rogue Coalition out of the conflict. But staying neutral in a galactic war doesn’t pay the bills, not when both sides refuse to trade with neutral sectors.

With her people on the brink of starvation, Samara hatches a daring plan to snatch the kidnapped Kos Emperor from the Quint mercenaries holding him. The Kos Empire will pay a fortune for their emperor’s return, enough to feed the Coalition’s citizens while they wait for the return to a begrudging peace.

But when her plan goes sideways, Samara finds herself evading Quint mercenaries with the very man she intends to capture. And the more time she spends with Valentin Kos, the more she realizes that he’s not the coldly indifferent villain she imagined. Torn between duty and desire, Samara must decide if saving her people is worth giving up the one thing she’s always wanted.

Review:
I first read The Queen’s Gambit when it was available on Jessie Mihalik’s blog as a free online serial and I enjoyed it enough that I purchased the final, edited version when it went on sale. The story was officially edited and expanded upon before official publication and I enjoyed the story as much, if not more, the second time around.

Samara is a great character, she’s the queen of a ragtag group of refugees and rebels who are living in the outer reaches of the solar system and just trying to get by without drawing attention of two warring factions. The war has made food and other supplies scarce and her people are struggling just to survive on very low rations. Samara has done everything she can think of to get food for her people but desperation has made her a little reckless and now she’s decided to kidnap Valentin, the new Emperor of the Kos Federation hoping to use the ransom for food and supplies. After all Valentin’s war is the reason her people are suffering in the first place so the least he can do is provide the means to save them.

I don’t want to say much more about the story but things with Valentin aren’t all what they first seemed and Samara may have bitten off more than she can chew by abducting him. Now she just has to decide if she can work with him for the good of her people or whether he will stab her in the back at the first chance he gets.

Jessie Mihalik has created a fun futuristic world with lots of interesting technology but even though this is only a novella I never found myself lost or struggling to keep up. There was a nice amount of action, a good selection of side characters and I also enjoyed the developing romance. I’m already looking forward to reading the sequel and luckily I don’t have to wait long because the author has already started posting instalments of The Queen’s Advantage on her blog!

Source: Originally read as an online serial on Jessie Mihalik's blog but I then purchased a copy once it had been edited and published